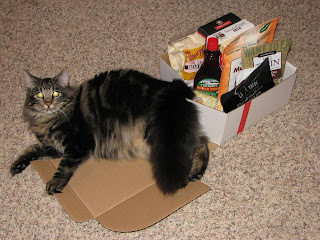 I hope everyone who celebrated had a nice Christmas. Our holiday was very nice. My living room is scattered with toys, chocolate kisses wrappers, furry mice, and bits of other unknown items. We spent the holiday at home with just our family. Christmas Eve we were working on a jigsaw puzzle and just kind of hanging out in the living room. Neil says, "It's nice to have the whole family together like this." I thought that was very sweet, especially coming from an eight-year-old. I mean, we're all home at the same time a lot, but it's not often we're just hanging out in the same room like that. It was cute of him to notice and speak up about it.
Santa brought me a box of goodies, which is pictured here. It was a sampler pack of all sorts of low-carb and low-sugar foods. These are foods I can't normally eat on my diet, more or less find them in the local stores. I was really excited about the instant cereal, but it was awful. Today, however, I had 5 huge pancakes with syrup. I've been on this low-carb diet since October 1st and I can't even remember the last time I ate pancakes. I was in heaven and loved every bite! They had a lot of egg in them and tasted more like French toast than pancakes, but that was okay. They were still yummy! And, after eating a big turkey dinner last night, I was happy to see I hadn't gained any weight. I did watch my carbs yesterday, which helped. I can't wait to try the muffins and the chocolate pudding -- marshmallows, too!

I had to laugh at Denny, though -- look what the little fatty did to the top of the box. He loves boxes, but he just smashed this one down flat. He's so funny. He got lots of new toys along with a tube that makes a crinkle noise. He loves it. He's already broken the pull-string off his little chipmunk toy and eaten the tail off one of his mousies. He's such a typical boy! We got up at 6:30am Christmas morning and found him right in the middle of the boys playing with these little electronic bug-things. I think they're called Hexbugs or something. He loves being in the middle of all the action.

Anyway, I hope everyone is having a nice holiday weekend.
Posted by Rena Jones at 8:55 PM