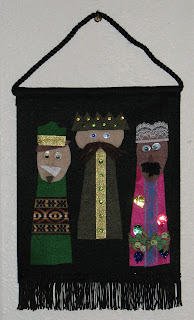 All this week the boys are doing Three Kings crafts. I know Three Kings Day is in January, but since we do more crafts right before Christmas, now seemed like the time to do these. This particular project was in Kathy Ross' Crafts for Christmas book. I adore Kathy Ross' crafts! Her books don't usually show actual pictures of the crafts, but drawings instead. Even so, I've found her projects turn out exactly how they're illustrated. And, they're easy, too, which is always a big plus for my boys!
We made ours a little more fancy by adding the fringe at the bottom and the rope cord up top. Even though the instructions didn't have them, I debated about adding gifts at the bottom. Then I decided not to because it would be too cluttered. And of course, now that I look at it some more, I should have glued them on the opposite way and put a star up top. Isn't it funny how you think of these things AFTER you've glued everything down? But oh well ... we still had fun putting it together. And besides, if the star was behind them, they wouldn't be following it, right? I'll stick with that -- ha!
We three kings of Orient are,
Bearing gifts we traverse afar.
Field and fountain, moor and mountain,
Following yonder star.
Posted by Rena Jones at 9:57 PM