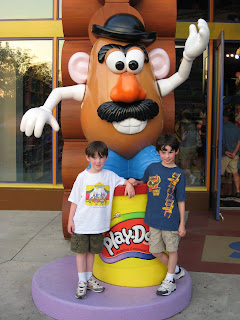 My youngest, Neil, turned nine today. He's been so excited about his birthday coming up. It's always a little hard for him because he has to suffer through my birthday on the 8th before he can really concentrate on his special day.
This picture is of Neil and Nathan with Mr. Potato Head. Neil is on the left. This was taken in 2008 when Rick and the boys went to Disneyworld. Obviously, I have more current pictures of him, but I wanted to put this one up because we're doing a Toy Story theme for his party. He doesn't know that yet, so I'm hoping to keep it a surprise until tonight.