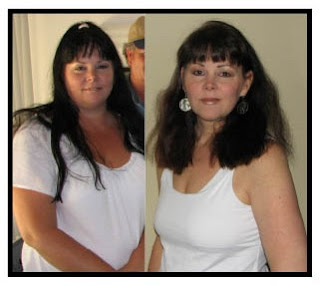 I won't call this Before & After because I'm not at my goal yet, but at least I'm moving again. For whatever reason, my weight-loss stalled during the entire month of March. I blame cheese. I was following the program, but I think I was eating too much at dinner. I started tracking my food a few days ago, which is something Rick's been telling me to do for months. As soon as I started keeping track of what I ate, I started losing again. Go figure.
These pictures aren't that good. In fact, they're a little scary, but they'll give you an idea. I have lost 53 pounds so far, but still want to lose another 21 pounds. I probably won't be able to lose them all by the time we leave for Disney World next month, but at least I'll be closer. Today I tried on 2 pairs of jeans that I hadn't worn in ELEVEN years. Not only could I get them up, but I got them buttoned AND zipped! They're still too tight to wear comfortably, but it's a start in the right direction.
It looks like my story and pictures (different than these) will be featured in the revised version of Fat To Skinny by Doug Varrieur. That's the book Rick bought last September and asked me to read. I think the revised version is coming out in 2012. I might be added to Doug's website, too. Look for me!
Posted by Rena Jones at 1:30 PM