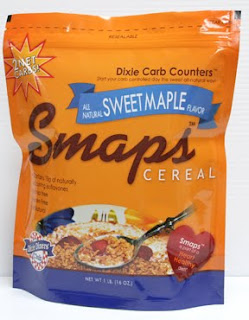 Those of you who have known me for awhile know I'm a huge cereal lover. I grew up in the 70s and cereal was a big deal. We didn't have the internet or iPods or even remote controls for our TVs way back then. We had cereal -- and most came with a cool prize. We had to dig for that prize the second we got home and, GOD FORBID if your brother or sister got to it first! The prize pretty much dictated what cereal we'd buy.

As I got older, I never grew out of my love for cereal. You can imagine my frustration going on a low-carb eating plan and realizing cereal was out of the question. They might make low-sugar cereals, but all of them are loaded with carbs, which is basically sugar from other ingredients. So, I stopped eating cereal for a long time. Finally, I came across this brand above. It's called Smaps and is by a company called Dixie Diner, which specializes in low-carb foods. A one pound bag costs me about $10 minus shipping. It's an awful lot for a bag of cereal, I know, but I'm the only one that eats it. One bag can last me a long time. If I were to describe it to you, I'd say it has the texture of Rice Krispies, but is more hard and crunchy like Grape Nuts. It has a light maple flavor and the best part for me is that it is only 2 net carbs per serving. So, I'm a happy camper being able to have a bowl of cereal every now and then.
I was thinking about cereal this morning and it came to mind that there are certain cereals I just have to add specific things to besides milk. Some of those are ...
Cheerios with bananas
Rice Krispies with strawberries
Grape Nuts with blueberries or huckleberries
Oatmeal with raisins
Chocolate Malt-O-Meal with mini chocolate chips
Regular Malt-O-Meal with butter and sugar
This was before I started eating low-carb, obviously. I'm looking forward to huckleberry season because I think a couple of those would be awesome in Smaps. I no longer drink regular cow's milk either. I had no idea how much hidden sugar (carbs) was in milk. Now I drink unsweetened almond milk, which I like just as much, if not more. It's way lower calories and has more calcium than plain milk. The brand I buy (Silk) is 0 carbs, too.
So ... what's your favorite cereal and do you add something to it?
Posted by Rena Jones at 8:53 PM