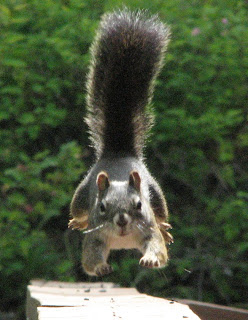 Today is National Jones Wildlife Day. What? You've never heard of this holiday? Okay, I made it up, but it's true. I've been looking forward to today for awhile because it was supposed to get up to 86 degrees. I planned to spend all day sitting out on the deck enjoying the sun, which is something we haven't seen much of lately. I didn't however, realize it would be so utterly crazy out there today. It started off as usual with me putting out the birdfeeder. A few minutes later I saw a doe and a brand new fawn walking up the hill. Awww, how cute, I thought and figured I would try to take a picture next time I saw them. Yeahrightsure.
Around 10:30am I make it outside and it's practically deafening with ravens just a little ways from our house. There has to be a kill somewhere. They did this last September and you might remember me going over there to see what was going on. I found a carcass that had probably been killed by a mountain lion or bear. So, something is out there again because the ravens are going nuts. The more they scream, the more ravens hear and come over. It will get louder and louder until they eat whatever it is. Yum yum.
Then there's my little squirrely friend. He keeps running up to the feeder, crams a few seeds in his mouth, and then bounces back to wherever he's stashing them. Back and forth, back and forth, back and forth. Every now and then he stops to look at me, or scold me for moving too fast. He even jumped off the deck railing (it's high!) and chased a poor chipmunk away. I know some people hate squirrels, but they make me laugh. If you've ever seen a squirrel hop along a deck railing, then you know what I'm talking about. Check my Facebook page later because I'm going to put a video up of the little guy bouncing back and forth.
The birdfeeder is always the happening place and the birds don't seem to mind me being there. The red breasted nuthatches crack me up. These birds get one seed and fly away. Then they jam the seed into the bark of a tree to crack it open. But for some reason, they insist on their flight pattern going directly over me. They get so close I can feel the wind when they go by. The black capped chickadees and mountain chickadees do the same thing and take one seed and fly away with it. Then there's the pine siskens, who are somehow able to make this incredibly loud SCREECH for such tiny birds.
Around noon it starts calming down, so I switch from my chair to a rickety, old lounge chair so I can lie on my stomach. That's when I realize there's a bunch of wildflowers blooming and how it would be nice to take some pictures. I start to get up, only to see another deer wandering through the yard. And wouldn't you know it -- she plops herself down right where the flowers are. Typical. So, I go inside to make lunch and bring it out to eat on the deck. Mrs. Bambi is still there and doesn't look like she's going to budge. I don't want to scare her because now is the time they start giving birth. I can't see if that's what she's doing or just resting. So, I'm eating lunch when a robin decides to land on a tree stump just a few feet away. Nothing says yummy yums like seeing a robin with 8-10 grubs sticking out of its beak while you try to eat your turkey roll -- ack! There's also a pilated woodpecker flying around the area. When I don't hear her kuk, kuk, kuk noise, I can tell where she is by the drumming on the trees. I get a few pictures of her and know she's a she because she doesn't have the red moustache like the males. After I eat, I get up and take some flower pictures on the other side of the house. When I come back, the deer is still there. 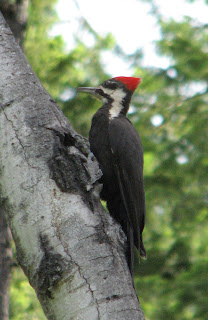 In addition, there's a female red crossbill in the feeder and I have to walk by that. She doesn't want to move and I don't want to scare her. So, I snapped some pictures of her and then slowly creep by. She doesn't seem to care. I sit back down and she stays there awhile longer, allowing me to take a few more pictures. These birds are cool because their beaks actually cross. She finally flies away, so I go back to lie on the lounge chair. I'm waiting for the deer to get up, but she's resting all comfy. So, I'm lying there on my stomach with my arms at my side. They start to fall asleep so I have to move them, only to find that some stupid spider had managed to spin its web all over me. So, there I am, fighting with spiderwebs and shooing away a million flies -- or 3 very persistent ones. 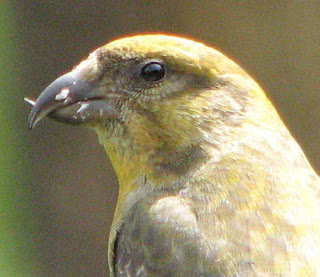 Finally, Mrs. Bambi decides to get up and leave. I didn't see any fawns, so she must have just been resting. She starts going up the hill, so I figured I could get a picture of the flowers. So, I'm over in the dirt in my bathing suit and bare feet taking pictures of an orange flower that I know is really just a weed. I look up and Mrs. Bambi is back! She's munching on plants and doesn't seem to mind me, which is odd because they usually snuff, stomp, and take off when they see people. I get a few good shots of her, but she's in no hurry to go, so I plop down in the weeds and dirt to wait. I wait ... and wait ... and wait. Finally, I have to go to the bathroom so bad that I have to get up and go to the front door, which I knew was locked. I would have had to walk right by her if I went back the way I came. Fortunately, the boys were in the living room and let me back inside. 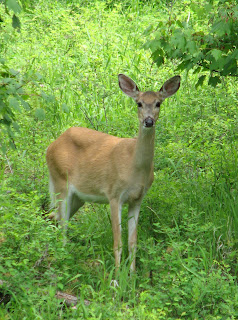 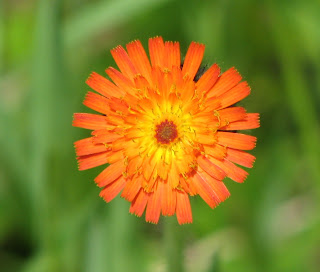 Cripes! So much for a relaxing day on the deck!
Posted by Rena Jones at 1:34 PM