What do low-carbers eat?

When people find out I follow a low-carb eating plan, the first thing they say is, "Oh, I could never do that. I love bread, fruit, and ice cream too much." After that they usually ask what foods I do eat just out of curiosity. So, in all my weirdness, I took pictures of some of my meals. Of course, Rick thought I was nuts and said, "Why are you taking pictures of your dinner?" I said it was for my blog and he goes, "You're going to blog about your dinner?" Well ... DUH! So, if pictures of food bothers you, don't scroll down any further. But, if you're interested ... 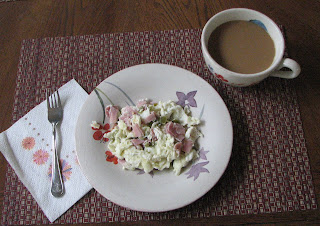 The picture above is, or shall I say, was my breakfast this morning. It's pretty simple. I scrambled three egg whites with a slice of lean ham and some jalapenos. I toss the egg yolks to cut down on the carbs; they're 1 carb each. I usually drink 3 cups of coffee each morning, sometimes with heavy cream and sometimes with a sweetener. The sugar alcohols in the sweeteners have been playing havoc with my stomach lately, so I'm trying to cut back. I've found I prefer my coffee lightened over being sweetened anyway. Some mornings I'll have a bowl of low-carb cereal. Other days I'll cut this meal down to two egg whites and add a muffin made with flaxmeal. If I'm feeling ambitious enough, I might even make some pancakes out of flaxmeal. They taste just like buckwheat pancakes. 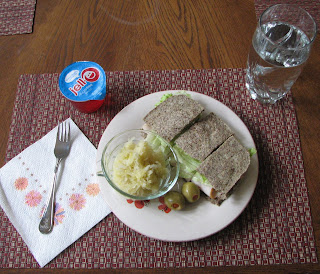 The next picture was my lunch, which I ate a few minutes ago. Here I used the same flaxmeal recipe to make a thin slice of 'bread' for my turkey sandwich. Add some habanero mustard and a little lettuce and I was good to go. If I had a tomato, a thin slice of that would make this sandwich perfect. Since I don't eat bread on this program (unless it's low-carb) I get my fiber from flaxmeal. I also had a half cup of sauerkraut, which has a little fiber as well. And lunch wouldn't be complete without two habanero stuffed olives. After the mustard and the olives, I like the sugar-free Jello to cool my mouth down. ;) 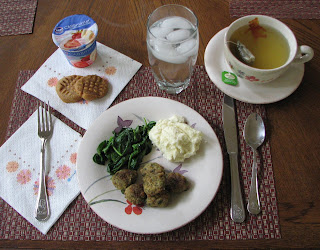 The next picture was last night's dinner. I had some meatballs (can't remember the brand name, but we got them at Costco), some spinach lightly pan-fried, and a serving of mashed cauliflower. I also had a container of Carbmaster yogurt, which you can find at Smith's/Krogers. It's only 4 carbs per container. That's a high number for me, considering I eat less than 20 carbs a day, but I'm such a yogurt lover that it's worth it. Most days I stay around 10-11 carbs. I also added a couple of Beanit Butter cookies. No, that's not a typo. They're made with soynut butter instead of peanut butter. And for my FTS friends reading -- yes, I know there are TWO desserts here. Snort! I don't always have the cookies on hand, but I did last night, so there. And considering I've lost 7 pounds in the past week, I guess it's working okay. I suppose once I get to my goal weight I'll be making more of the dessert goodies listed in the Fat To Skinny Bakery book. Some of those are really good. The peanut butter cups are AMAZING! 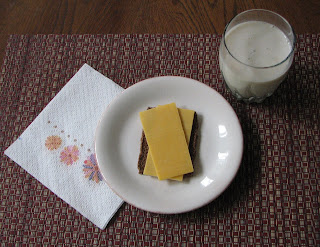 This last picture is what I had for a snack yesterday. It's simply a piece of low-carb Scandinavian crispbread with a slice of cheddar cheese (cut in half) on top. I also added a cup of unsweetened almond milk to go with it. I've stopped drinking regular milk since going low-carb and found I really LOVE unsweetened almond milk. It's 0 carbs and only 35 calories per cup. Compare that to regular milk, be it whole, 2% or 1%. It has more calcium, too. So, there you have it -- just a small sample of what I've been eating these past 8 months. It might not look like much to you, but it's helped me shed 63 pounds, so I'm happy. But yeah, blogging about my food ... major weirdness.
Posted by Rena Jones at 12:31 PM