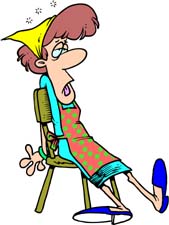 Gosh, the past three weeks have been crazy. First, I wasn't feeling well, which threw us off school for a couple of days. Then the boys got sick. Then I had a bunch of doctor's appointments, which threw us off even more. Then the boys seemed to have a rebound sickness. It's just been insane. As far as school goes, we are keeping up okay. We're a little behind, but it will all work out in the long run. The boys will finish some of their shorter curriculum books before they finish the others, so we can make up the difference then. All this week we've managed to get the academics done, but have held off on extra stuff like extra reading, crafts, poetry, typing, and stuff like that.
Our cat, Denny gave me a scare yesterday at lunch. He was huddled in the corner and then began meowing at me like he was in pain. After that he got in his litter box a couple of times and just sat. Having worked in a pet clinic before, the first thing that came to mind was that he was blocked. That's common in male cats. CJ was blocked several times also. So, I called the vet and they said the soonest they could get him in was the next morning. I was really surprised by that because a blockage can be life threatening. Because of my past work experience, I saw how he was acting and decided to wait until his appointment. Later on he was running through the house like a goon. He was also eating and drinking. Then when I checked his box this morning, I noticed there was three piddle clumps. We have two cats, and I'm pretty sure Kitty didn't do all three, so I figured Denny was probably okay.
About an hour before his appointment this morning, Rick and I were watching him. He was lying on his back with his feet up in the air, purring like a madman. Rick goes, "Just look at him. He's miserable." Stupid cat! I figured he was okay, but we decided to take him in anyway. He was due for his check-up and shots, so I figured it was best to have him looked at. Rick took him in because I was at the doctor's office. Apparently, when they took Denny's temperature, he got startled and piddled a little on the table. Rick goes, "Well, I guess he's not blocked." Little goober. They got a urine sample and that looked fine, so I guess he was just having a weird moment yesterday. The vet did suggest he lose about a pound because he's up to 17 pounds -- the little porker! The tech loved him and carried him around on her shoulder to show him off to everyone in the office. Denny = Mr. Popular.
As for me, I had my pre-op junk today. I had an exam with my doctor, who suggested we add another procedure onto the one I'm already having done next week. So, maybe this will help take care of the problem even more. Afterwards, I went to the surgery center to check in. My surgery isn't until next Friday, so I thought it was odd they had me check in a week early. And wouldn't you know it, but they said it was too early to draw my blood, so they asked if I could come back sometime next week. GRRR! They're the ones who set up the stupid appointments. Now I have to go back Wednesday for bloodwork. The actual surgery is Friday morning. So anyway, Denny and I are both a little cranky today, having been poked and prodded at too much.
Posted by Rena Jones at 7:11 PM