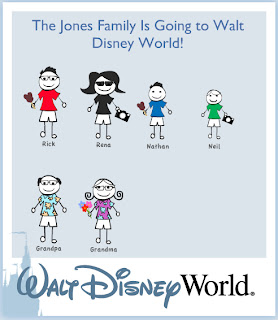 This picture is a fun application Walt Disney World has on Facebook. At least that's where I found it, but they might have it on their website also. You can design your family members, either in regular clothes or Disney character costumes. Of course, Neil and I both had to have cameras. Rick and Nathan seemed best off with ice cream bars. My ILs used to live in Hawaii, so the shirts and flowers suited them well. Pretty cute stuff.
We've ended up taking this entire week off from school. I was sick on Monday and Tuesday. Then yesterday I had a doctor's appointment, so that messed the week up even more. At that appointment, they scheduled me for another one today, so today is shot also. The boys and I decided just to take our Spring Break now and we'll work through the one I had scheduled off. That will work. Who knows -- we might be able to catch up by working a little longer each day next week. I'll have to see how things pan out.
I'm going to have a minor surgery coming up, but I don't have a date yet. It's the same thing I had done back in 2010. It's an outpatient thing, so it shouldn't be any big deal. It's just a girlie issue that I've had. If I get the condition a third time, there's a chance I might have a hysterectomy. With a trip to WDW in May, I didn't want to get that now and still be in the recovery process. That would be no fun, especially because I really want to try the Summit Plummet this time! Click "video" on that link to see what it is, if you don't know. I chickened out last year -- ha -- but not this time!
Posted by Rena Jones at 11:00 AM