A Wish and A Prayer 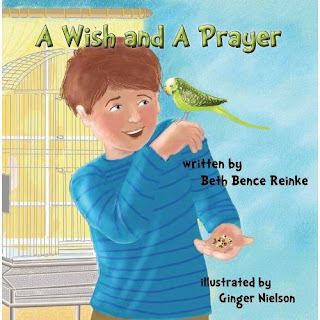 I've been meaning to blog about this book for the longest time. It's been sitting on my nightstand for months and is a favorite of my boys. A Wish and A Prayer is written by Beth Bence Reinke and illustrated by Ginger Nielson. You might recognize Ginger's name from a few of my books, A New Friend for Dilly and Pony Strings & Critter Things. A Wish and A Prayer came out in 2010 and was published by 4RV Publishing, LLC.
One day a young boy named Jason was playing pirates with his parakeet, Sonny. An ambulance passes by with its sirens blaring, causing the bird to get scared and dart out the window. Jason and his mother look all over for Sonny, but have no luck. With suggestions by his friends, Jason begins wishing for Sonny's return. He wishes every day at 11:11. He wishes as he tosses pennies into a fountain. He wishes on the stars at night. He even makes his own wish as his friend Scott blows out his birthday candles. Sonny still hasn't returned. With the help of his mother, Jason learns the difference between wishing on objects and praying to God.
This is a fabulous book to show children the difference between wishing and praying. It also shows the power of prayer itself. Ginger's illustrations bring the story to life with colorful characters and beautifully elaborate details on each page -- from the cracks in the sidewalk to the penguins on Jason's pajamas. This is a wonderful book that children of all ages will enjoy.
Posted by Rena Jones at 11:02 AM