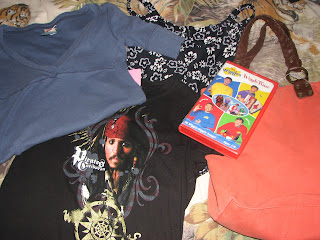 Well, they may not be treasures to you, but I think they're kind of cool. I stopped at the Salvation Army on my way home from my appointment at the imaging center today. Yeah, I know -- again. That seems to be my favorite place these days. I found a cool blue top, a Pirates shirt with Jack Sparrow, a bathing suit I might never wear, and a Wiggles video, and a purse.
If you follow me on Facebook, you might have seen my post about giving up a bunch of our old Wiggles VHS tapes a few years back. I figured I had them all on DVD, so I decided to get rid of some of the VHS ones. Little did I know at the time, they had remade some of the songs, so I had gotten rid of a lot of the older, original ones that we loved so much. I was sick over it for years. Anyway, last Thursday I was there and found some of the old VHS tapes, so I got those. Chances are they could very well be my own tapes that I donated. Since I went back today, I wanted to get this one too.
And if you're on my Facebook page, you've probably hear the story about my infamous orange cargo pants I bought the other day. Yeah, they're orange pants! Not exactly what anyone would expect me to buy, more or less wear, but they called to me. I bought them for $2 the other day and I totally love them. Well, as you can see in this picture, I found a purse to match. So now I'm a total nerd -- from head to toe. I just need an orange hat now!
The big news of my day is that my second mammogram turned out good and they don't think there is anything to worry about. I had a mammogram last Thursday. Friday they called and said they wanted to look at something a little closer. I had no idea what that meant, and I was just sick over it all weekend. Then yesterday when they called to remind me of the appointment, I asked about it and the lady on the phone gave me the impression that it was blurry and they just needed it retaken. So, I relaxed a little. Imagine my surprise when I walked in and the tech goes, "You understand why we called you back, right?" I looked over at the computer screen and saw the image with what clearly appeared to be white spots. Ugh!
So anyway, they redid the one side and took closer pictures. The radiologist read them right away and within minutes came in to talk to me. She said it appears to be calcifications and that it's very common. They do, however, want to recheck in six months just to make sure they aren't forming into anything serious. So, I get to deal with it all again this summer, rather than a year. But anyway, that's the good news. Now I just need to get through my other surgery on the 24th of this month. Hopefully, whatever they remove from that will be cancer-free as well. Sheesh -- it's hard getting older.
Posted by Rena Jones at 5:39 PM