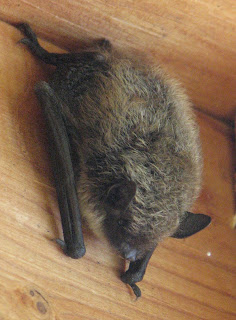 Rick was just outside opening up our ratty, old table umbrella when he noticed a little, brown bat inside. I ran off to grab my camera, but before I could, the thing flew out and was dodging circles around Rick on the deck. I forgot about my camera in the hysteria. I thought I was going to wet my pants laughing. It landed on the side of our deck railing -- pictured above. The picture below shows his little fangs. "Kaaaa! I keel you!" 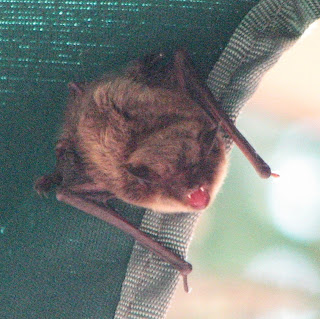 Then it flew back to the umbrella again. The lighting was bad and he wouldn't hold still for very long, so the pictures aren't that great. I had no idea they could crawl around so fast. I should have taken a video. Of course, the silly thing flew out a few times, making me dodge around and look like an idiot. But in my typical fashion, I denied it and blamed it on the deck being hot and burning my feet. 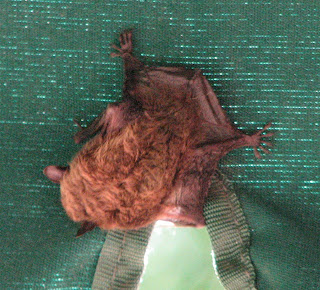 He crawled around so quick and it was amazing to see how he stretched and twisted in so many ways. Rick said, "I think we need to buy a bat house." A second later, the bat flew up and landed on the eaves of our roof and slipped inside a tiny, thin opening. Buy a bat house? I think we already have one. 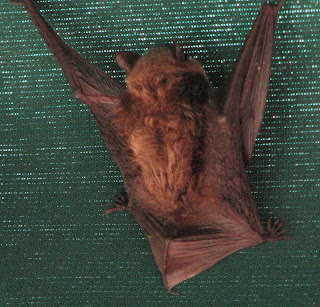 I don't know much about bats, so I don't know what species this is. We have several in Montana. Some of them are listed here. It wasn't very big and was probably smaller than my fist, clenched. We've seen one in our umbrella before, and ironically, it flew out and landed on the same exact spot. I think I posted a picture of it a few years back. It was probably a different bat, but still funny how it did the same thing. 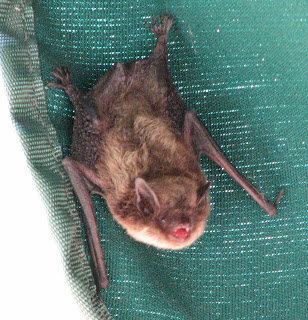