All Along the Watchtower 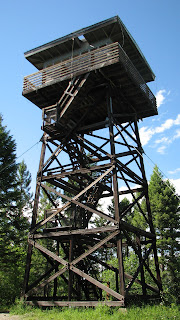 Tomorrow we'll be staying in the Mission Fire Lookout Tower near Swan Lake. It's not too far from our home, but it is in the middle of the forest with not much else around. It's also 40 feet up in the air. As you can see from the picture, we're going to have some stairs to hike up with all our stuff. We're looking forward to it though. It's something we've been wanting to do for a long time. This place sells out every summer and the only available date we could get was September 11th. I don't think it's open too much longer. I believe it shuts down sometime in early fall.

Right now I'm listening to All Along the Watchtower by Jimi Hendrix. It's a great song. Before this, I was listening to the original version by Bob Dylan. It's amazing to me how different the versions are from one another. Anyway, with us staying in the tower, this particular song came to mind.

I doubt we'll have any Internet connection out there, but I'm planning on taking lots of pictures while we're there. If you want to see what the tower looks like, there's a video on You Tube of some people who were staying there. Just keep in mind that I do not know those people. It just shows the tower a little bit, as well as one girl flipping the cameraman off. Ugh. If you want to check it out, you can by clicking here.