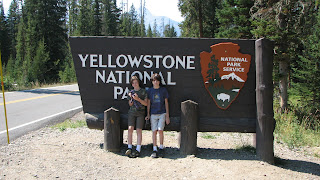 Neil and Nathan in front of the East Entrance sign. You'll notice they have Bootcamp, the Sock Kitty. The boys make movies with that thing and were just about to film him by the sign. 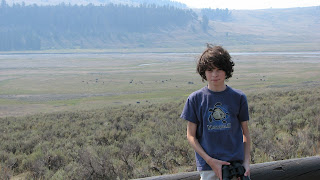 Nathan in the Lamar Valley. If you look carefully, you can see a herd of bison behind him. To the left of those was a herd of elk. It was so smoky that day because of some fires in the park, as well as the ones in Idaho. 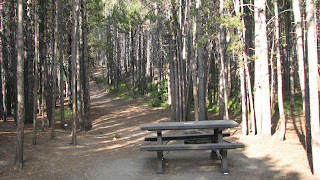 This was our campsite at Canyon Campground. Unlike all the other sites, this particular one is all by itself. It looks like it's set on an old service road. I'd definitely stay at this spot again because there was literally no one around us. I believe it is site #277. 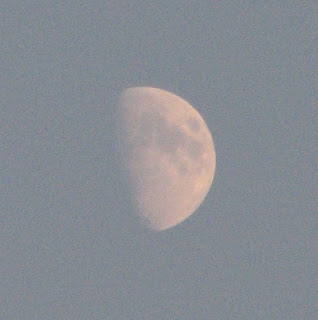 The moon looked really cool when we were there. I took this one with my camera, but got some better shots with Rick's zoom lens. I tried to take some at night, but they didn't turn out well. By that point, the smoke was so heavy that the moon looked blood red. 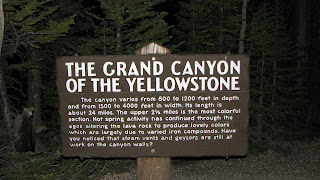 We stopped at the Grand Canyon of the Yellowstone at dusk. I'd never seen it that time of day, so it was pretty cool. Obviously, I didn't take many pictures because it was getting dark. This is the sign as you head to one of the lookouts. 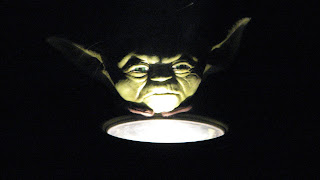 And of course, what would any trip be without our good friend, Mr. Yoda! Here he is telling scary, ghost stories by the fire. "So creepy, I am!" 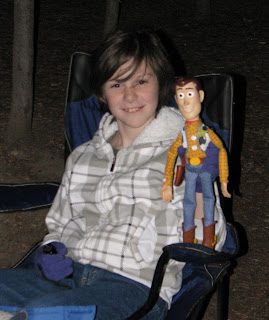 Wherever Yoda goes, Woody follows! Neil is totally into Woody. He used a birthday gift card to buy this Woody doll. He takes it everywhere. Between Woody, Yoda, and Bootcamp, we always have a crowd! 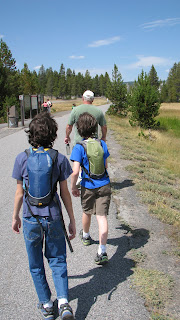 Rick and the boys walking through the thermal features of Old Faithful. It was pretty windy when we were out, but that worked to our advantage because it cleared away some of the smoke from the fires. 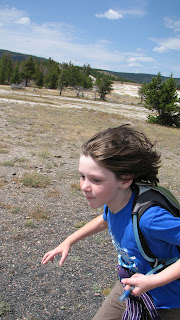 Neil really isn't much of a hiker. He doesn't seem to enjoy it as much as Nathan does. He's okay for awhile, but gets bored. He's more of our shopper and would rather check out the gift shops. Here he is getting mad at me for picking on him, so he took off running. He's such a little goober! 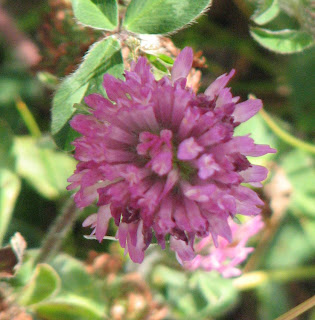 This is just a simple clover flower, obviously. For some reason, I like taking pictures of them. This one was hard to catch because it was windy. 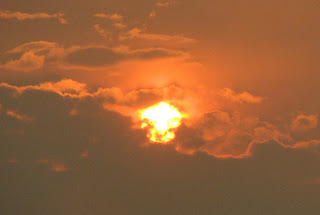 The picture above was actually taken on our way out of the park. The sun and clouds looked really eerie with the smoke from the local fires. I'll post more pictures of the thermal features next time. I took a lot of those this trip because we spent most of our time in the Old Faithful area.
Posted by Rena Jones at 11:27 AM