There is a Berenstain Bears book called Too Many Commercials where Brother Bear and Sister Bear are awestruck by the commercials they see on TV. Each week they want the newest toy or cereal that has been advertised. They nag Mama Bear until she finally gives in. Finally, she makes a plan that they can get the next thing they see on a commercial as long as they don't ask for anything else until its gone or has been played with for an entire month. Turns out the toys weren't as great as the commercial made them sound and the cereal wasn't as good as it looked on TV. It's a cute book. I can relate to Brother and Sister. I used to get up early every Saturday morning to watch cartoons and especially to see the commercials. I don't watch TV hardly at all now. But if I happen to sit down while Rick has something like Unwrapped on, I'll start craving whatever they're talking about. I remember them doing a special on the history of peanut butter and jelly sandwiches. After watching that for a few minutes, I found myself in the kitchen making one. The last craving I had was after watching them make Fat Boy ice cream sandwiches. I'd never had one before, but after watching the show, I couldn't rest until I tried one. And like the bear cubs discovered, sometimes things aren't as great as they seem on TV. 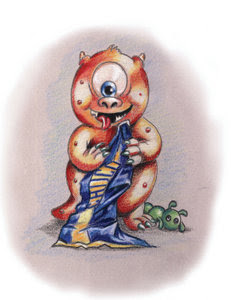 Rencently, I posted a review for a children's picture book by Holly Jahangiri called Trockle. In the story, Trockle finds a wrapper from a Choco Taco under the bed. It's only a brief mention, but the power of advertising works for me. Since reading that book, I've been craving a Choco Taco. I hadn't had one of those in years. In fact, I didn't think they were still made. When I mentioned it to my husband he told me Taco John's restaurant sells them. I couldn't believe it. So, of course, the other day we were driving home and I saw Taco John's and had to stop. Sure enough, they sold them and I was able to satisfy my craving. Then Rick tells me he doesn't know what the big deal is because he sees them in stores all the time. I honestly can't recall seeing them, but he said he sees them. And of course, the store we went to yesterday didn't have them. I guess I'll have to keep looking. But what's so funny is that I got this craving from a picture book. It was so powerful that we made a special stop to buy one. And if that wasn't bad enough, last night I had a dream I was at a store looking for them. Of course, I couldn't find them at first, so I was chewing Rick out about it. Then after he walked away, I found some boxes in this huge walk in freezer, but I was getting frustrated because they weren't the right flavor. So, as you might guess, now it's a quest to find Choco Tacos in the stores.

Do things like this happen to other people -- or am I the only weirdo?