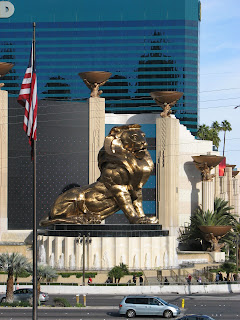 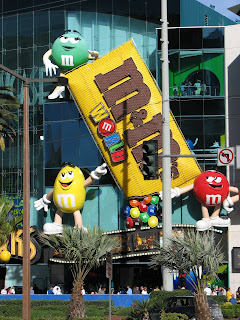 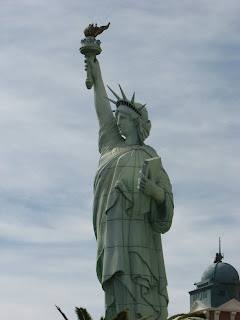 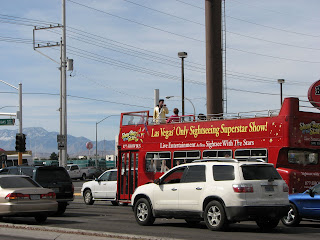 Here are a few more pictures from Las Vegas. The first is the huge golden lion from the MGM Hotel. The next is of M&M World, which was packed with people. After that is the Statue of Liberty from the New York, New York Hotel. And finally, there's a picture of Elvis in a gold lame suit riding in a double-decker bus. You never know what you'll see in Las Vegas. We went into a bunch of the old themed hotels yesterday like Excaliber and Luxor. They've totally removed the theme from inside, so it's hard to even know what hotel you're in anymore. It's too bad because some of these hotels used to be really cool. I remember when the Luxor first opened and everything was an Egyptian theme. There was even a boat ride down the Nile River. Now you can't even look up and see the pyramid from the inside because they have it all blocked off. It's too bad. Last night we went up the Effiel Tower at the Paris Hotel. We'd never done that, so that was cool. We were up there just in time to watch the Bellagio fountains go off. Anyway, internet connection here stinks and I keep getting bumped off, so I better try to post this. We're headed out to see Caesar's Palace and the Bellagio now. Talk to you soon. Hugs to Nichelle, Nicole, Nathan & Neil.
Posted by Rena Jones at 11:29 AM