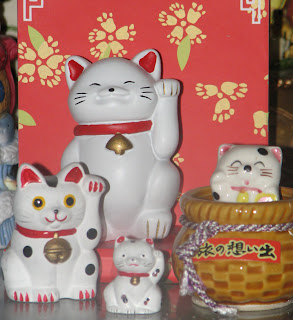 A long time ago one of my pen pals from Japan sent me a Maneki Neko figurine. That would be the one with the yellow eyes on the left of this picture. I love cats, so this was a fun addition to my collection of cat figurines. Later on, I found the one in the ceramic basket at a yard sale. I think I bought it for a quarter. It says Japan on the bottom, but I have no idea where it was originally purchased. The little tiny one was given to my by my sister-in-law and the biggest one I bought at a Barnes & Noble bookstore here in Montana. These four are all I have in my collection.
Maneki Neko means Beckoning Cat, but is also known as Welcoming Cat, Lucky Cat, or Fortune Cat. It's common in Japanese art design and you've probably seen these cats at some point. The cat is probably a Japanese bobtail and is usually sculpted with one paw up in the air. Everything on these figures has some sort of symbol or meaning. If the left paw is raised, it is believed to help bring in customers. You might have seen these cats in restaurants or gift shops. If the right paw is raised, it is believed to bring wealth and good luck. The collar, bib, and bell all have meanings too. Click on the click above if you'd like to learn more.
Anyway, since my last post was pretty depressing, I wanted to write about something a little more pleasant. As I said, I only have four Maneki Neko figures in my collection right now. I keep them in my china cabinet along with a slew of other knick-knacks. I don't come across these little figures too often, especially in Montana.
Does anyone else have a Maneki Neko figurine?
Posted by Rena Jones at 5:12 PM