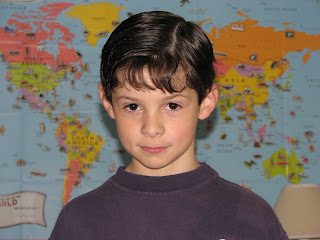 My ten-year-old, Nathan has been working on a story for the past few months. He's hand written it in a spiral notebook. He finally finished it the day before last. All of yesterday he reminded me that he was going to read it to me, which he did last night. It's called Wild Conflicts.
It's about two boys named Jack and Bob who run away from home and end up lost in Ottawa, Canada. They get ahold of a Jeep and manage to drive around the US, avoiding being caught by the police. Somehow they get involved with an army of deer, who ironically, carry MP-40 machine guns. And, as with any great story, there's a big battlescene. Finally, their mom finds them and brings them home to New York just in time for Christmas. A few parts made my laugh out loud, such as this one during the battle ...
"You idiots! You destroyed my fleet, my army, and most of all ..." Everyone paused. "Scared me for a moment!"
Such a funny kid. He's been using maps and the globe for reference as to where the kids in his story travel. He even mentions state capitals and famous landmarks. The story is 23 pages long and has 9 chapters. His writing is tiny too, so I'm kind of curious what his word count is on it. Maybe I'll type it up for him someday to find out. And of course, he wants to get it published now. Who knows -- maybe someday he will.
Posted by Rena Jones at 10:12 AM