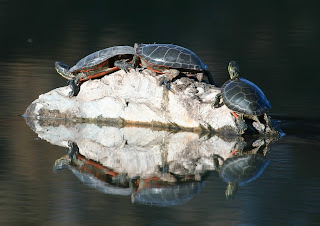 Rick took this picture when we visited the National Bison Range awhile back. I wish I could say I took the picture, but he had the good zoom that day. Not that I'm bitter or anything. I cropped it though, so that has to count for something. Right? If you click on the picture, you should be able to see them close up and better.
I love turtles. When I was really little, my brother and sister found a turtle by our house. It was covered in tar or something and all I remember is them trying to get it off. Other than that, I've never owned a turtle. Nicole once said that she wanted to get a turtle and name it Turdy. After all, she has a cat named Kitty. Sounds logical to me.
I'm pretty sure the turtles in this picture are Painted Turtles. They're found in ponds, marshes, and lakes. These particular ones were in the middle of a pond near a trail at the Bison Range. They're called Painted Turtles because their skin has red and yellow marks that looks like it's been hand-painted. Here are some more interesting facts about them ...
Posted by Rena Jones at 8:52 AM