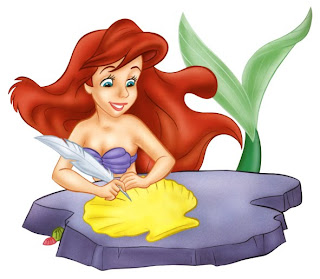 The other day on Facebook one of my writer friends posted a video clip of an interview by the paranormal author Sherrilyn Kenyon. Now I write picture books and occasional I give a shot at middle grade stuff. I'm not into young adult or adult novels that much, especially ones about vampires and spooky stuff. I'm such a wimp. But for whatever reason, and maybe it was Sherrilyn's eyeshadow, I was sucked into this video clip. She's a funny lady and seems like one of those people you'd just love to hang around with. One of her readers asked if she makes outlines. She replied with this ...

Those two things really stood out for me. I used an outline with my first middle grade and it worked really well. Before I even wrote the story, I had an idea of what I wanted to happen from beginning to end. The outline guided me, but I later added to it. My second middle grade (the one I'm submitting now) I didn't write an outline. I started to, but when the writing actually began, it took off in its own direction. And because of that, the story completely changed from my original idea. That was fun. The one I'm working on now is totally different. I have an idea of what I want it to be about, but there's no way I can outline. It's just sort of -- happening.

Do you outline, or do you let your stories go their own way?

If you'd like to watch Sherrilyn's interview, click here. It's pretty interesting, even just to see her crazy eyeshadow. I'm not familiar with her, but she has like a gazillion books on the bestsellers list. I'm sure there's a story behind her green, sparkly eyeshadow too.