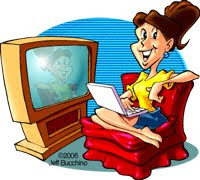 Last night I posted on Facebook how I felt like an outcast because I don't watch TV. So many of my friends have been talking about American Idol, LOST, Dancing With The Stars and all those other popular shows. I don't really feel left out -- just weird. I was surprised how many people replied and said they weren't into TV much either. To be honest, it's not that I don't watch the popular shows -- I don't watch any of them. If I do watch something on one of the channels, it's usually a political talk show. I know that sounds weird coming from someone who writes picture books. I'm just not into it. When I do sit in front of the TV, it's usually to watch a DVD.
Lately, Rick's been saying my sense of humor has changed. He loves comedies and is always trying to get me to watch the newest movies. I try to, but they're just not funny to me. Recently, we watched the Get Smart movie and he made fun of me because I didn't laugh through the entire film. (Well, there was that one part when they made fun of Hollywood actors not being able to give their political opinions if the city blew up -- I laughed at that.) The rest wasn't funny, at least not to me. Then we watched Fun With Dick & Jane and it was the same. Maybe he's right. Maybe I have lost my sense of humor when it comes to movies. Mind you, my whole family loves TV. The boys don't watch it as much as most kids, I suppose. They're more into PS3 or playing outside. I'm the oddball of the family.
However ... sit me down in front of an animated film and I'm all giggles. I laughed throughout the entire Ice Age 3 movie. Open Season 2 makes me bust up in hysterics, especially with Roger the cat. When one of the dogs says, "I gotta poop!" I laugh so hard my sides hurt. If someone says that in a regular movie, I turn into my grandma and become totally disgusted. I don't know anymore. Maybe I'm just the world's biggest prude.
Maybe it's just comedies. They're all so crude. It's spilled over into kid's movies, which is one of my pet peeves. An animated dog saying he has to poop is funny, but it's not when it's coming from a person, even if they're animated. I've found the movies I enjoy the most are the furthest from reality as they can get -- Star Wars, Pirates of the Caribbean, Indiana Jones, Jurassic Park, and Narnia. Maybe it's not that I can't handle comedies. Maybe it's that I can't handle reality. When the spaceship breaks in half in Star Wars III and Anakin says, "I think we lost something" -- that's funny to me. But when it comes to television shows, I'm absolutely clueless.
How about you -- do you watch a lot of TV?
Posted by Rena Jones at 1:59 PM