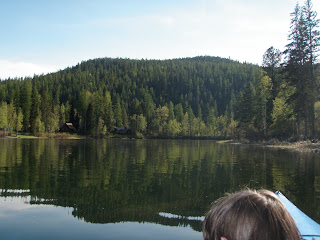 I'm tired! Not only that, but I'm starting to hurt all over now. It's been a long day. This morning I was in bed, trying to wake up, while watching the squirrel eat in the feeder out on my deck. A picture book idea hit me in the head, so it wasn't long before I had my laptop in front of me and I was typing away. It turned out to be a very short picture book, but that's okay. And yes, it's about squirrels.
Then I did school with the boys. We're at the end of the year and most of our books are either completed or close to being done. This week we're doing Little Red Riding Hood Week at school. I know that might sound a little babyish, but we're going to have fun with it. Today I read a child friendly version of the story from a picture book. Then the boys did some simple crafts. Tomorrow I'm reading the original Grimm's version. I also found lots of activities to go with the story online. There's even a section that talks all about wolves, so that will be interesting.
After school, we decided to go for a bike ride along the Swan River. It's pretty close to our house, but we did need to drive to the trail head. There's a nature trail that's fun to ride on. It's a 4-mile ride round-trip. After we were done, the river was looking really nice and we just happened to have our kayaks still on our van. We had put them up on Saturday when we went to Glacier, but it got too windy to go out that day. So, after our bike ride today, we put the kayaks in the Swan River and paddled around for a bit. Rick and I are both moaning and groaning now because we haven't used those paddling muscles in awhile. The picture above is the Swan River. We live on that mountain in the background, but more on the other side of the mountain.
Then we came home and had dinner. As I was filling the dishwasher, I remembered we were out of Cascade, so I had to drive down to the store to buy more. After a day like today, I wasn't about to do the dishes by hand. As soon as I got home, the boys wanted me to play Sliders with them. It's a board game by the same company that makes SORRY! So anyway, I'm pretty tired right now and am seriously thinking of hitting the hay. And if today wasn't crazy enough, I get to have a root canal on Wednesday. Lucky me.
Posted by Rena Jones at 10:08 PM