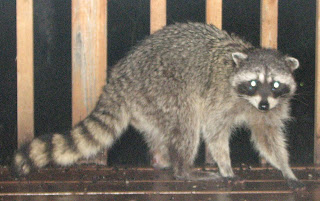 Crazy night last night! I stayed up late working on my website and getting frustrated because every time I uploaded it online, something wasn't working right and I couldn't figure out why. In the meantime, I heard something on the deck, so I got up to see what it was. It was this little raccoon. I took some pictures, but they didn't come out all that great. Anyway, he munched on the seeds for awhile and then wandered off, so I went back to my computer. A bit later, I heard noise again, so I figured he was back. I grabbed my camera and walked up to our glass doors again, hoping to get some better pictures. Except, it wasn't my raccoony friend.
It was a BEAR!
And it wasn't just any old bear either. It was a BIG black bear! I mean, really big! It's back almost went up to the railing on my deck. A big, big bear! Since I was expecting the raccoon, I stumbled with my camera and got a good picture of my shirt reflection in the window. By the time I got ready to take another one, the bear had made eye contact with me and ran down the deck and back out into the yard. I had gotten pretty relaxed about leaving the seeds out, especially with all the late snow. And besides, we haven't seen any bears here in a very long time, so I thought maybe all the construction over the hill had sent them somewhere else. I was wrong. This guy was huge. I'm not sure if it was the cub that used to come around a little over a year ago, or if this was a new one. It certainly wasn't the momma bear that used to come around. All I know is that this sucker was BIG! However, we brought everything in and he didn't come back during the night. At least not ON the deck, but he could have been wandering around under it or in the yard. I know they do that a lot even when we don't see them.
Anyway, I'm pooped now because I stayed up past 1am, which is something I never do. And then it was one of those restless nights where I left the blinds open and slept with one eye open as well. I did, however, finally figure out why my website was acting up, so at least I got that fixed. As I said before, I totally redesigned my site. I was initially going to make it more colorful and child-like since I write picture books. However, I found a black & white template I liked a lot, so I went with that instead. Click here if you would like to see the new site. If for some reason something doesn't look right or work right for you, please let me know so I can try to fix it. Thanks!
Oh, and one more thing -- guess what I dreamt about? Yep, bears! I dreamt there was a momma bear and a cub on my deck. I was on the phone with my neighbor, so I told her I had to call her back. I went to shoo the bears off and the cub jumped down first, followed by the momma bear. Next thing I know, I'm over the deck railing (which is a long way down) shooing the baby off again. Suddenly, I see the momma bear's back is ON FIRE! I run up to this huge black bear -- remember, this is a dream, which is hard to tell with me sometimes -- and I'm whacking the fire out with one of my manuscripts! She stands there looking at me like I was nuts. Crazy night!
Posted by Rena Jones at 8:24 AM