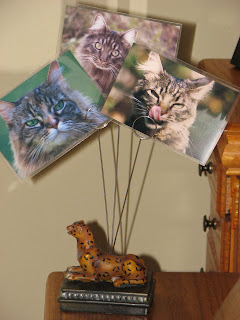 Well, it's about time! I'm usually good at keeping up with photo projects. For some reason, these 3 had slipped on the back burner for a long time. I'm not talking a month or two. I'm talking years. The first one (above) was something I bought when we moved into this house. I had decorated my master bathroom with big cat things and I saw this little picture holder at TJMaxx. We moved into this house in 2006 and now it's 2010. Let's not do the math, okay? Anyway, I've been wanting to put some pictures of CJ and Belle on it, but I wanted to laminate them first because I had the holder next to my tub. I can't even blame it on not having laminating sheets because I bought those years ago. So, all this time, the little leopard has been sitting there pictureless and collecting dust. Not any longer -- yay me. 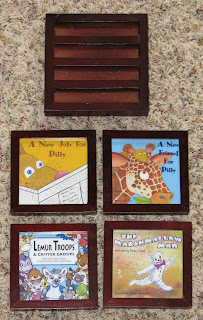 This next project goes back to Christmas 2006. I believe Rick gave me these little coasters for Christmas that year. I love anything I can put pictures in, but for whatever reason, the box got put into a cabinet and was on my neglectied to-do list. It wasn't until something like 6 months ago that I found them and took them downstairs, where the box sat under the desk collection dust. As I looked at the coasters, I saw they were square and that my book covers would look cool in them. I finally got them done -- yay me. 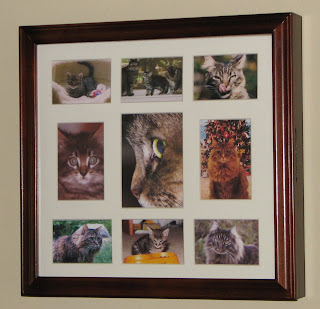 This last picture is of a picture frame jewelry box that you hang on the wall. Rick and the kids gave it to me Christmas 2008. I know, I know -- what kind of slug am I! It sat behind a table forever and then I moved into in my room where it sat until Monday. I decided to fill it with pictures of CJ and Belle as well. Now it's hanging on my bedroom wall, waiting for me to put some jewelry in it. I wonder how long that will take! However, it has pictures in it finally and it's up on my wall -- yay me.
So, I think I'm set for now. The only other thing I can think of that I've been meaning to do is my photo keychain. Right now it has Christmas pictures on it, so I want to change those. Well, that and my digital photo frame in my room, because I need to update the disk in there again. But all the same, I got three projects finished, so -- yay me.
Posted by Rena Jones at 12:42 PM