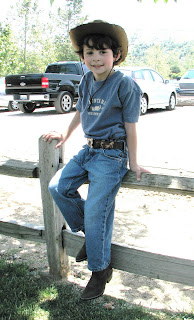 The past few days I've been working on my digital picture frame. Okay, obsessing over my frame is probably a better word. I have about 1015 pictures on that thing so far. The horizontal pictures work fine, but sometimes you have to tweak the vertical ones so they don't cut things off. In order to do that, you have to see them on the frame itself and not in your file. That takes time with 1015 pictures, which explains my obsession.
Anyway, I found this picture of Nathan in one of our files. It was taken just before we moved away from California in 2006. We took the boys to a friend's birthday party and they had a western theme, so they dressed up for that. I think Rick took this picture and I never looked at it much because it was taken in the shade and really dark. I lightened it up a bit and -- wow! What a CUTE picture! If the background wasn't a parking lot it would be so much better. Even so, Nathan can be such a cutie sometimes.
Do you have a digital picture frame? I'm on my second one, but I totally love them. It's amazing how many pictures you can fit onto a disk. Mine even plays videos, music, recipes, and more. We got it at Costco. I've given them as gifts to my mom, Rick's parents, and Nicole. They are so much fun, especially if you make a huge file of pictures or even a themed set. Mine is getting so big that it's like having my whole life flash before me. Funny though, 1015 pictures don't flash by too quickly. It takes several hours to watch mine go through a complete cycle. They're really fun and I hope they come out with huge ones someday -- big as TV screens!
Posted by Rena Jones at 9:18 AM