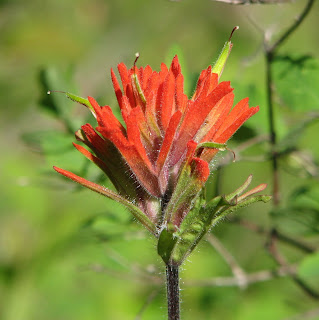 A few days ago Rick and I took a hike up the hill behind our house. We live on a small mountain and we're at the end of a dead-end road. Our backyard basically goes straight up into the forest. It's not very "usable" when it comes to landscaping or doing much with, but it's fun to hike up. They're are developing to the left aways, but if we go straight or right, it's still undeveloped. That's not to say it won't be eventually. It's fun to hike up there, but it's kind of freaky too because there's literally no one around. It's not like hiking on a trail where you're bound to run into someone sooner or later. I'm sure it's where all the bears live, so we're always on guard when we go up there, and we carry bear spray. Anyway, I went up hoping to find some flowers to photograph. I guess it's still early because the flowers down our road are starting to bloom more, whereas they haven't at our house yet. I did get a few flower pictures though ...
The picture on the top is called Harsh Paintbrush. I thought it was Indian Paintbrush at first, but those are pinkish in color. Harsh Paintbrush was used as a dye for American Indians. My wildflowers book says they were also used for decoration, as a component for a game, as well as drinking the nectar. The yellow flowers below are called Nine-Leaf Bisquit-Root. This flower was collected by Meriweather Clark in 1806, who stated that the American Indians used to bake or roast the root. 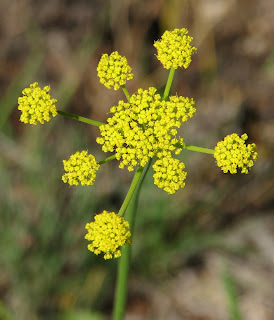 This other yellow flower pictured below is a Mountain Arnica. Or at least I think it is, according to my book. It says some American Indians cherished this flower for it's love charm (whatever that means) and also for it's medicinal value of healing bruises and swelling. I think I've seen Arnica in stores where vitamins and herbal supplements are sold. It's used for healing sprains, sore muscles, and strained joints. I took a few other pictures of the area and flowers, but I'll save those for another time. 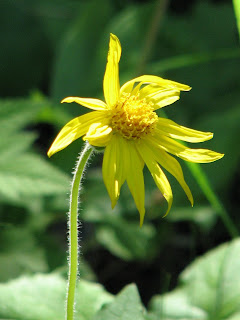 Don't forget about my coloring contest for Lemur Troops & Critter Groups. I'm running it until June 22nd, so there's still time to enter. I have a few drawings coming in by mail, so if you can't scan yours, let me know and I can give you an address. Click on the book title above to go to the contest and I hope to see yours soon!
Posted by Rena Jones at 9:22 AM