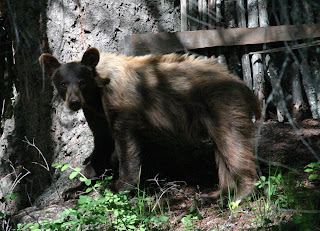 Things are slow in blogland, including my own. I guess a lot of people must be busy enjoying the summer months. We've had our share of beautiful weather here and I've found myself on the deck the past few days. I just finished reading A Tree Grows In Brooklyn. I had never read it before and once I started, I couldn't put it down. I really need to get busy getting my house picked up for next weekend. My in-laws are coming up from Southern California to stay for 5 days. The boys are excited about their grandparents coming. Nicole just let me her copy of To Kill A Mockingbird, so I'm going to try to hold off on starting it or else I'll never get anything done.
We've also had a lot of bears wandering by lately. This morning we had the black cub walk around the house. Nathan named him Flint and he limps when he walks, favoring his front right paw. Just a few minutes ago his sister was on the hill behind our house. We've named her Sassy. I'm pretty sure these are the 2 cubs that used to come by with their mom awhile back. They should be 2-3 years old now, so they've probably left their mom and she could have a new set of cubs by now. I just took this picture a few minutes ago when she was wandering around the boy's fort. We had a pretty good idea she was coming, so she didn't take us for surprise. Whenever there's a bear in the neighborhood, there is a succession of barking dogs. You can almost tell where the bear is and which way they're moving. I've learned the dog's bear bark over the other barks. It's funny how we drive around all day in national parks hoping to spot a bear, and yet, here we've had 2 in one day. She's a cutie -- she looks like a Sassy!
Posted by Rena Jones at 6:14 PM