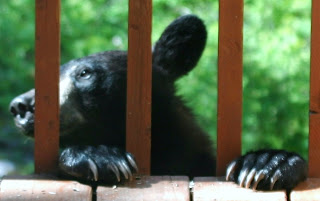 I had another dream about bears the other night. Actually, it was early in the morning and I couldn't go back to sleep afterwards. I dream about bears a lot since moving to Montana. Most of the time, the bears are outside and I'm frantically trying to get a door or window shut. It never closes right and I'm always struggling in a panic. In one dream, I remember trying to hammer screws into a sliding glass door to lock it. Weird. The funny thing is, the bears are just meandering by, minding their own business, exactly like they do when I see them nearby. Very rarely do I dream the bears are aggressive.
Not this time.

In this dream there were four, massive grizzlies. They were cruising down a stream and all I could see was their heads sticking out of the water, reminding me of hippos. Except they weren't hippos. They were bears -- grizzly bears. It just went from bad to worse from there. These bears weren't meandering. They weren't minding their own business. They were killing people. My kids were there and I was trying to keep them from witnessing it, but that wasn't happening. For some reason, I had a knife and ended up using it -- multiple times. It was just horrible.

Then of course, I woke up and had that cold, surge of adrenaline rush through my entire body. I hate that feeling after having a nightmare. I don't know. Maybe if I didn't take pictures like the one above, then just maybe, I wouldn't have these nightmares. But gosh, they're so darn cute, even with their 4-inch claws. Well, at least they're cute in real life. In my dreams, they're another story. Oh goodie, it's almost bedtime. Wish me luck!
Posted by Rena Jones at 8:31 PM