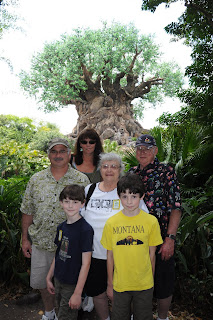 We got our Disney PhotoPass CD the other day. When we went to Disney World we had signed up for the PhotoPass feature. They give you a card to hand to photographers throughout the parks, usually at the prime photo locations. My ILs paid for this and they're getting a really cool memory book. I'm having it shipped to me so I can see it first before sending it to them. I spent several days designing it, so I'd at least like to see it. We're keeping the CD that has a lot of the pictures.
This picture is one of those, taken at the Animal Kingdom with the Tree of Life in the background. Personally, I don't know if I'd pay for this service every time I went, but it was nice to do it once. I'm hoping the memory book for my ILs turns out well, especially since they don't take a lot of pictures. What was nice was that I could upload my pictures to add to the book along with the ones the Disney photographers took, so that was cool. My ILs are already talking about going back. I told you they loved it there.
Posted by Rena Jones at 8:45 AM