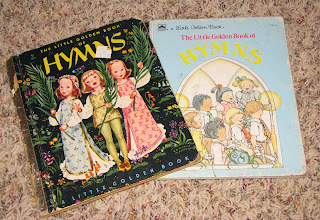 About a week ago I blogged about not liking cover changes in books that are re-released by the publisher. Click here to read the post. Last night I decided to type a list of all the Little Golden Books in my collection. It turns out I have 106 of them, but that doesn't include some I know we have packed away in Christmas boxes. As I was writing the titles down, I discovered I had two copies of The Little Golden Book of Hymns, although both are very different.
The original 1947 version, shown on the left, was the one I found at the Salvation Army yesterday. The version on the right is from 1985 and I'm pretty sure I found it at the same place awhile back. As you can see, the covers are extremely different and I was curious how much the inside had been changed. Obviously, the illustrations give each book their own feel because they were done by different people. Corinne Malvern illustrated the 1947 edition and her name is shown on the front cover on the lower right. Frances Score Mitchell did the 1985 version, but there is no reference to her on the cover. The illustrations in the original are brilliant. There's no comparison to the newer version. On the title page of the 1947 version it says, "Collected by Elsa Jane Werner" and on the 1985 version it says, "Compiled by Elsa Jane Werner and E.D. Ebsun."
So, not only did they get a new illustrator, but they added a new person to compile a new list of hymns. I was very surprised to see how much the inside changed as well. There are 25 hymns in the 1947 version. In the 1985 version, only 7 of those original hymns made the re-release. They added 6 new ones that weren't in the original, making a total of 13 hymns in the newer book. What a shame. Perhaps they were trying to cut down on pages. The original version has 42 pages and the newer one has 24. Sadly, they cut out some really great, old hymns for the newer version. I'm sure there's a lot more to this than I know about -- perhaps since technology has changed so much that they weren't able to reproduce the first edition of the book because of some issue with the original artwork. Or perhaps they felt some hymns were more modern and went better with the updated illustrations. It's so hard to tell. I haven't been able to find any updated versions that are more recent. However, it makes me wonder what they would leave out or add if they ever did one. It's kind of sad, if you ask me.
Posted by Rena Jones at 9:19 AM