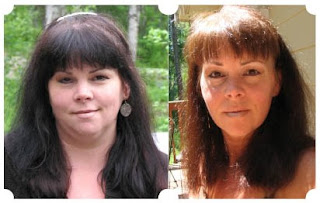 Ten months ago I wouldn't be caught dead posting a picture like this. I absolutely hated having my picture taken. In fact, there's a huge gap in photos of me over the past 10 years -- just call me Phantom Mom. It was much easier being the one behind the camera instead of in front of it. This picture on the left was probably taken around 2009 or maybe early 2010. When I was photographed, I'd cringe. On a positive note, being overweight and avoiding being photographed did spur my interest in photography. I suppose there's a silver lining to just about everything. Sometimes you just have to squint to see it.
I started a low-carb eating plan on October 1, 2010 and have lost 68 pounds since then. I'm also exercising regularly and enjoying it, which is kind of freaky. I never enjoyed exercising as an adult. I loved being outside and doing things like hiking, kayaking, and bike riding, but I didn't like exercising for fitness. I do now. Yesterday I was in Target looking at ankle weights and exercise mats. Yeah, me -- bizarre. A few people have said I've inspired them to lose weight, exercise, or get healthier. That's really cool. I never see myself as an inspiration to anyone, so it's wild to hear someone say that.

I have 6 more pounds to be at my goal weight. Several people have said it doesn't look like I have 6 more pounds to lose, but I still want to reach it to give myself a little leeway. The numbers on the scale haven't been moving as fast lately, but that's common with the last 5-10 pounds. Hopefully, I will get there sometime in the near future. For the first time in over 12 years, I'm starting to feel more like myself. Unlike a year ago, I don't have the urge to snatch cameras out of anyone's hands or threaten to kill them if they post my picture on Facebook. That's a good feeling. Even more, it's awesome to have someone tell me I've inspired them to either lose weight, start exercising, or just take their health more seriously. That's the best of all.