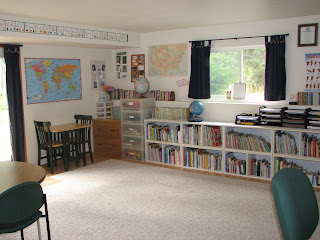 I finally got our classroom picked up and organized. Well, at least for this picture anyway. What you don't see is the big pile of junk sitting on the floor that I shoved out the door so I could take this picture. For the most part, it's picked up and ready to go. It's a big room and this picture only shows a portion of it. The boys and I sit at that round table mostly.
We were planning on starting school the day after Labor Day, but we had a little set back over the weekend and were called out of town. Since the rest of my book order didn't arrive until Tuesday, we decided to hold off and officially start next Monday. So, Monday it is -- better late than never.
I was bummed that some of our old computer programs won't work in our new system. I had wanted the boys to do these programs we had for Spanish and Bible. Sadly, they won't run on the computer we have now, so I'll have to come up with something else.
We're also going to be doing a monthly newsletter this year. I'll have the boys work on that each Friday. Then at the end of the month, we'll print up copies to mail to family and maybe a few friends that might be interested in what we're doing. That should be fun and will give the boys a chance to learn how to design a newsletter on the computer.
So, just a few more days and we'll be back in the swing of things!
Posted by Rena Jones at 9:28 PM