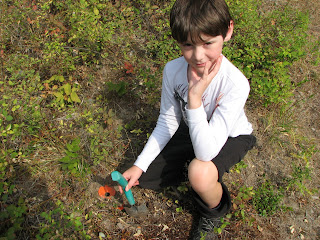 This picture of Neil was taken on Tuesday afternoon. Try to overlook his ripped sweatpants. I swear, my boy's pants all look like that. They flip out when I threaten to throw them away. They have nice clothes -- really, they do! Anyway, Tuesday was his first day doing science and there was an activity he wanted to do. The project was for him to take a jar and bury it in the ground, just at the level of the dirt, and leave it overnight. Then he was to check it a day later and see if any critters managed to get caught in the jar. Awhile back, my mother-in-law had given me some preschool paint jars that had plastic lids and an opening for a paint brush, so these worked perfect. It was like the Tunnel-O-Doom because nothing had a chance when it came to sliding down and trying to get out. So, we found an animal hole that looked like it had been abandoned and stuck the jar in that along with a little dirt, some grass, and leaves. I honestly didn't think much would be in the jar when we looked at it today. Boy, was I wrong! 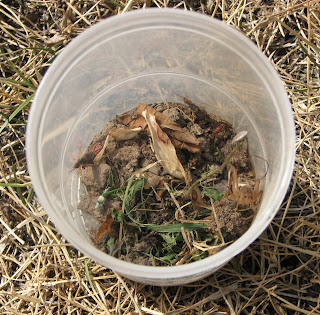 It's hard to tell here, but the jar was FILLED with creepy, crawly critters! If you look on the right, there's a cricket. Click on the picture to make it larger -- he'll be looking right at you! The jar was bursting with life and everything was totally anxious for freedom. There were quite a few earwigs, some spiders, red ants, black ants, a millipede, the cricket, and quite a few bugs we couldn't identify. Neil poured the jar out onto a piece of construction paper and I tried to take as many pictures as I could before they all scattered away. The cricket was playing dead, but as soon as we backed away, he perked right up. Needless to say, it was a fun experiment for Neil. We can't do stuff like this just any old time because of snow, so I'm glad we've had such nice weather to do it. I couldn't believe all the critters that fell into the jar! 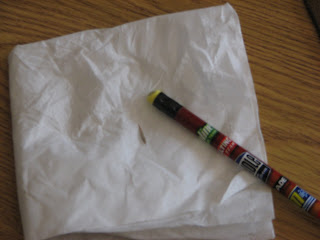 See this picture of the pencil? That sharp pointy thing got stuck in my eye yesterday. It happened right after I took some pictures of the jar buried in the ground. I wanted to document it for Neil through pictures, and as I bent down to take the last one, I didn't see a very long, tall piece of grass sticking straight up. It was like a foxtail and it went right into my eye. I struggled to get it out, but I couldn't, so I had to rush in the house. At first it seemed to be stuck IN my eye, but by the time I made it to the bathroom mirror, it had moved and was floating over my eyeball. It was hard and very sharp. I started to panic, but finally got it out. Talk about drama! A simple science experiment turned into a lesson in first aid. Eeek. Anyway, my eye felt better after I got it out and I didn't think there was any damage. Then it started bugging me more and when I looked I could see a little black circle in the white of my eye. I think the foxtail might have actually punctured it. Of course, I'm being a pain and haven't been to a doctor yet. If it's still bothering me tomorrow, I'll probably go in and have it checked out. 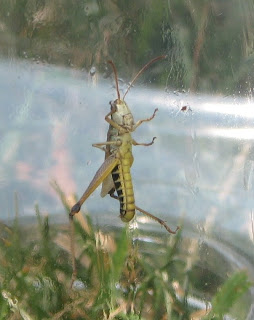 Then after school today, the boys and I (and Denny!) spent several hours out in the yard collecting more bugs. They had one jar literally filled with grasshoppers and another bursting with ants. They also managed to catch some damselflies, dragonflies, a butterfly, a housefly, and some other critters. I got lots of pictures for them along with some short video clips. It was definitely a creepy-crawly kind of day!
Posted by Rena Jones at 8:26 PM