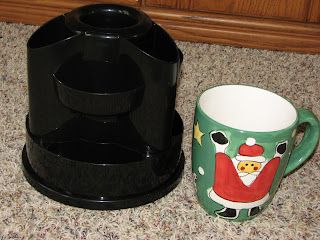 Or maybe a better title would be -- Junk I Find At The Dump! I'm getting pretty bad about picking stuff up at the dump these days. I wouldn't say I'm a dumpster diver, by any means. I never go in the bins, but I see lots of people do that here. Some probably do it to find stuff to sell and make money. I'm sure others do it out of necessity. I'll never forget the story Rick told me about the family with two young girls who were digging around in the trash bins. One of them, a teen, was in the bin and held up a dirty top to see if it would fit her. How heartbreaking is that?
By dump, I mean a trash bin site, and not the county dump. We don't pay anyone to come pick up our trash. Instead, we take it to a trash site and it's then picked up and taken to the bigger dump. I just wanted to clarify that in case someone thought I was hanging around the county dump. I haven't gotten to that point yet -- ha ha! Now don't go giving me any ideas. After all, Christmas is coming!
A couple of weeks ago we were pulling out of the dump site when I spotted a coffee mug sitting on one of the bins. I told Rick to stop the car and of course, he grumbled and complained. I said, "I can use that to hold pens and pencils in." So, I got out of the car and walked over to it. Right underneath the mug was this black desk organizer. How weird was that? So, I picked that up along with the Santa mug and brought them back to the car. Rick grumbled again and said something about us not needing to go shopping anymore when we could just come to the dump. We were at Staples today and I saw the same black desk organizer for $10. Considering mine cost me nothing and looks brand new, I guess I got a bargain. It even spins!
We were there again today and there was this huge ceramic bunny. I told Rick, "Go get me the bunny!" but he would have nothing to do with it. How rude is that? So, I had to get out of the car and check the bunny out myself. It was a cookie jar, but the top had a broken part that was kind of sharp. It smelled funny too, so I decided to leave the bunny where it was. I came walking back with three porcelain Indian figurines and Rick goes, "What are you going to do with those?" I said I didn't know and stuck them in the back of the van. I just couldn't let those little Indians sit there in the dirt like that. That would have been terrible.
Posted by Rena Jones at 9:49 PM