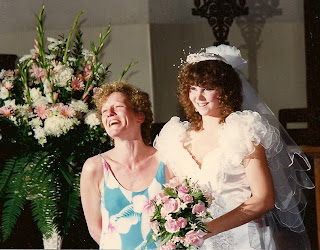 I just found out that a long-time friend of my family has passed away. This picture shows me with Betsi right after Rick and I got married. Betsi did the flowers for our wedding in 1988. Apparently, ours was the first wedding she ever did. She said she had been so nervous at the time. I remember taking this picture because the photographer said something and Besti replied, "Now I'm gonna cry!" Someone caught this snapshot just as she said that. Betsi did a beautiful job with our flowers. I still have a box of pearl-topped floral pins in my sewing box that she stuck in the centers of the little white flowers of my bridal bouquet.  They'll be bittersweet to see now.
I wasn't super close to Betsi, but my sister was. I've known their family since I was about five. Her mother lived right behind us and her father lived in another house fairly close by. Betsi and her sister, Francie kind of went back and forth between houses. My sister was good friends with them and I was the "tag-long" mostly. I'm sure they hated me being there, but some of my fondest memories of being a kid was hanging out with them. They used to skip school and go to Carrows for coffee. Sometimes I'd go with them. I can still taste the coffee with all the cream & sugar I'd add to it. It was because of them that I started drinking coffee at such an early age. I also remember going to the bowling alley with them and eating these great, big cinnamon rolls. We'd slather them with butter before eating them. Odd, but good.
Over the years I lost touch with Betsi until last summer when we reconnected on Facebook. She'd see the old pictures I'd post of myself as a little kid and say, "Now THAT's the Rena I remember!" It's funny how your mind sticks with a certain image of a person no matter how many years go by. After hooking up with Betsi on Facebook, I was pleased to see she was so set in her faith. I never knew her to be religious growing up, so I was happy to see how comfortable she was talking about what was important to her now as an adult. Like I said, we weren't super close, so I didn't know she was sick until just a few months ago. I had no idea how poor her health really was. Betsi will be missed by many, many people, myself included.
Posted by Rena Jones at 2:11 PM