Grand Canyon of the Yellowstone 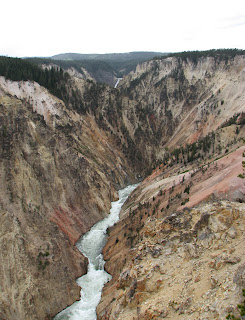 I was very saddened to read about an eighteen-year-old girl who fell to her death inside Yellowstone National Park. It was her very first day on the job working for the park concessions firm. As you know, I visit YNP quite often and have been at that same location many times. It's called Inspiration Point and it's in the Grand Canyon of the Yellowstone area of the park. You can read the actual story by clicking here.

I was sure I had pictures of the area, so I went looking and found these. The one above is looking up the canyon. The one below is looking directly down from Inspiration Point. As you can see, it's a long way down. And yes, those are full-sized pine trees down there, which gives you a little idea of the enormity of the area. The river is powerful and it's very rugged terrain. 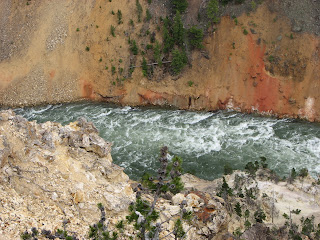 Apparently, the girl stepped off the platform and the cliff gave out from under her. If I am remembering right, there are signs in this area warning visitors not to do that. Why she did, we may never know. My heart breaks for her family and friends, knowing that she fell literally hundreds of feet to her death. They couldn't even retrieve her body until the following day.

My husband groaned when he saw I posted this story on Facebook. He prefers stupid, happy posts -- like the Princess Leia cat wearing towel rolls on her head -- but I posted it for a reason. The park is wild and dangerous. It's not Disneyland. The guard rails and trails are there because they've had incidents before. I can't tell you how many times I've seen people do stupid things in the park. Whether it's climbing over a rail to get a picture or trying to stick a finger in a geothermal feature -- people do crazy things. 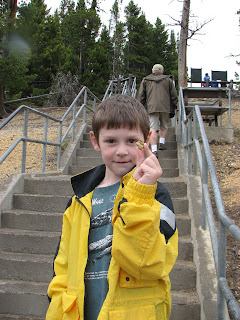 I'm not saying this girl was stupid. Maybe she simply didn't know better. Or maybe she thought just like other people do and that everything would be okay. Obviously, it wasn't. It's a shame that a young life was taken away so quickly and senselessly. I always tell my husband that Death in Yellowstone by Lee H. Whittlesey should be mandatory reading for every visitor before they're allowed to enter the park. It's a real eye-opener. Read it if you can.

And THAT is exactly why I'm posting about this again. If you've ever been to YNP or any of our other national parks, I'm sure you know how spectacular they are. Enjoy them, but enjoy them safely. Trust me, the view is just as good behind that railing as it is five feet away. 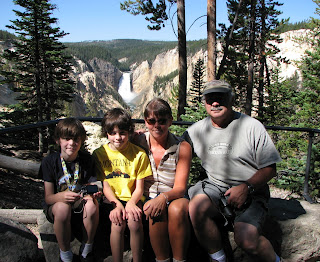 The picture of Neil in the yellow jacket was taken in 2009. He's holding up a yellow stone, which is what the park is named after. But don't worry. He put it back on the ground before we left. If there's anything my boys know well, it's to respect the parks and never remove anything from them. The only thing we ever pick up is trash. The final picture is of me, Rick, and the boys. It was taken last fall after we took Nicole to college. Yellowstone is such an amazing place. I think it should be a must-see for everyone.
Posted by Rena Jones at 6:24 PM