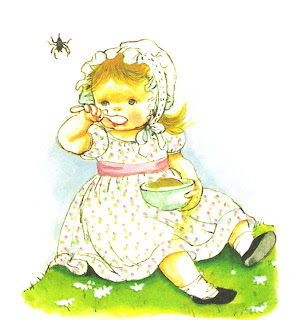 Little Miss Muffet
Sat on a tuffet,
Eating her curds and whey;
Along came a spider,
Who sat down besides her
And frightened Miss Muffet away.

You've heard the nursery rhyme before -- probably hundreds of times. I know I have. This morning I was sitting in my big, brown, comfy chair drinking my breakfast. Every morning I make a Pure Protein whey shake with a small banana blended with ice. Great breakfast. So anyway, there I am looking at my drink, thinking about whey when Little Miss Muffet came to mind.

When I was little, I thought tuffet was another word for behind. You know, like a person's behind, or their rear, rump, butt, whatever you want to call it. I had no idea that a tuffet meant a stool. When you look it up, the definition is: a tuft or clump of something, or a footstool or low seat. I'm not sure when I learned it was something she sat on and not her rear-end, but that's what I thought the word meant when I was little. So anyway, I remember giggling to myself whenever I heard this rhyme because I thought it was silly it was mentioned that she sat on her tuffet. I mean, what else would she sit on?


Kids say funny things and often they don't realize the meaning of what they say. I did that with a few things when I was little. We used to have a department store called The Broadway. I used to call it The Broad's Way. My mom would give me a stern look, which told me that wasn't a good thing to say. Another was when we bought our house in Ojai. My mom went to the road to pull up the "For Sale" sign. As she walked back through the yard, I chanted, "Mom's for sale! Mom's for sale!" I got another stern look. Obviously, my joke wasn't funny. I also have this funny little birthmark on my right, big toe. It's shaped like a little bush. Again, my mom didn't think it was funny when I used to say, "That's my little bush!" D'oh! But hey, I was five, so I didn't know I was being inappropriate or saying something bad.

Did you ever say something inappropriate although undeliberate?
Posted by Rena Jones at 5:52 PM