I'm going through some old photographs today. I came across a bunch from past trips to Yellowstone. If anything, all they're doing is making me wish I were there. I came across this picture above and it always makes me laugh. I have no idea who that man is, but his hat says Ennis, Montana. Figures. It just goes to show you how close people get and don't give wildlife the space they need and deserve. He's lucky he didn't get gored. Those antlers might be covered with fuzzy velvet, but they can still cause injury.

I also came across the following pictures of a time we watched a grizzly sow take down an elk with her two cubs. We were really far away and didn't own the good zoom lens that we have now, so these pictures are cropped pretty hard. They'll give you a little idea of what we saw. The bears chased them back and forth. They were on a little inlet of land between Yellowstone Lake and an overflow area of water. They literally had no where to go. 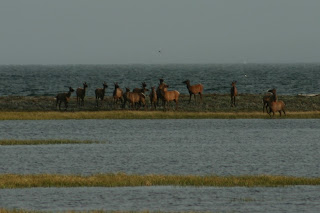 In the picture above you can see them perk up and start looking around. In the picture below, they realize it's a grizzly and take off running. If you've ever heard an elk scream, you know how eerie that sounds. Now just imagine a whole herd of them screaming. Freaky. 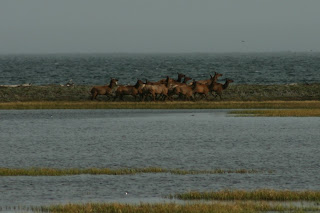 Here comes the mom in the picture below. She doesn't look all that big here, but remember we were really far away and the picture is cropped. 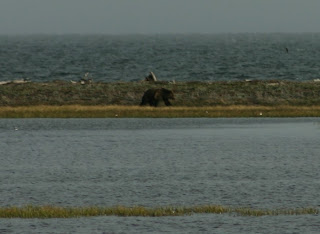 In the photograph below you can see the sow on the right and then one of the cubs coming up along the left. There were two cubs with her, but they were spread out and I didn't get all three in the same picture. And once they started running after the elk, they were just everywhere. 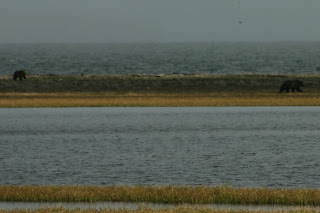 The picture below is when they were running. The elk ran all over the place, including in the water. I honestly can't tell if this is the mother and a cub, or if it's both cubs. It happened pretty fast. 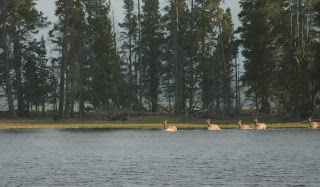 This last picture is where the sow took down one of the elk. It happened just over the bank, so we couldn't actually see the elk, but we saw it go down. Every now and then one of the three bears would pop its head up to look around while they were eating. Nom, nom, nom ... 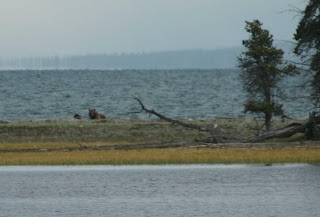 Not to be morbid, but it was fascinating to watch. Typically, bears go after elk that are young, sick, or elderly. If you think about that, it is kind of sad. But then you just have to realize how many elk there are in relation to how many grizzlies there are. It's a wild thing to witness, and it's definitely not something you see every time you go to the park.
Posted by Rena Jones at 11:24 AM