Sassy Bear is back! 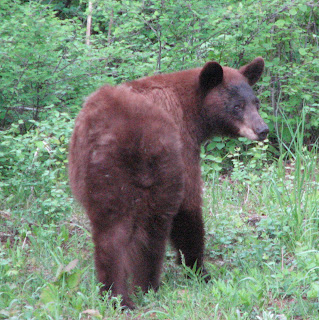 We've seen a little bear activity in our yard recently. I guess that might freak some people out, but we like it because we live in the forest. This particular bear is one we've been watching since she was just a cub. She used to show up with her mom -- a huge black bear that I nicknamed Bearzilla -- along with her brother. Her brother was black and Nathan named him Flint. The female I named Sassy, or Sassy Bear. Anyway, to make a long story longer, Sassy now has two cubs of her own. Ironically, they look exactly like she and Flint looked when we first started seeing them a few years back.

The other day I was sitting in a chair in my living room. I heard a noise and looked out the window. There was Sassy Bear. She had hopped onto the railing and was proceeding to crawl onto the deck. Mind you, our deck is five feet high in some places, maybe even higher, but it was nothing for her. I don't know what came over me, but I stood up and said, "Now get down from there, Sassy Bear." Silly, huh? Of course, she saw me through the window and started to crawl back down, almost like a toddler crawling out of a crib. Rick calls me Snow White because I talk to all the animals around here. Pretty silly, but I'm beginning to think he's onto something. "I'm wishing ..."

As Rick was getting ready for work yesterday, we heard a familiar thud on the deck. Sure enough, Sassy was back. By the time we got to the door to look out, she had hopped down and was on the lawn next to our house. Of course, I grabbed my camera and went outside. It wasn't all the way light yet, so most of my pictures were kind of blurry. The one above was the best one I got yesterday. However, she also left some footprints on the deck railing, pictured below. There are also a few shots of her standing up looking at me right after I told her to get down, along with some others of her cubs. To be honest, I was glad to see it was Sassy. I hadn't seen her awhile, so I was worried something happened to her. She must have had her cubs last spring because they appear to be about a year old now. Black bear cubs usually stay with their mother for just about two years. And from the picture of her standing, it looks like she's still nursing. Gotta love that Sassy Bear! 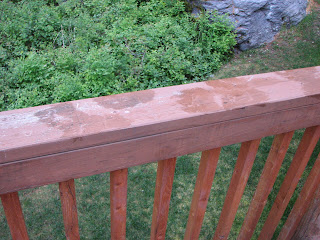 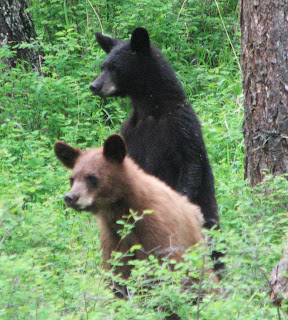 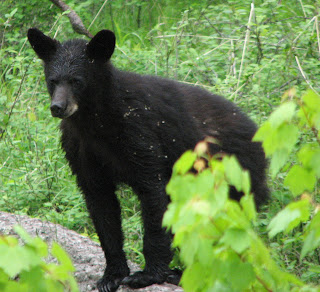