Pirates of the Modern Day 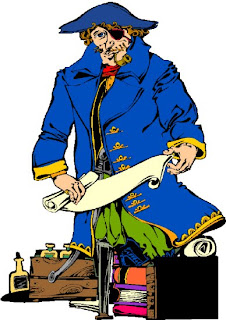 When most people hear the word pirates I'm sure images like this cartoon come up -- peg legs, eye patches, maps, buried treasure, etc. If not that, then images of Johnny Depp and Orlando Bloom or something along those lines. Hollywood has taken pirates to a level all its own. Most of what we see on the big screen or television isn't real when it comes to pirates. And often times, what we see is so outdated -- sloops, cutlasses, flintlocks, cannons, etc. If you watch or read the news, you'll see that pirates are still very real. They've traded their flintlocks for assault rifles and their sloops and compasses for high speed boats with GPS machines.
Did you know there are currently 130 sailors being held by pirates in Somalia right now? The Chandlers, from the UK, are still being held hostage. They were taken from their yacht last October as they were heading to Tanzania. The pirates asked for $7M in ransom, but the British government refuses to pay it. They hope, by not paying, that pirates will stop kidnapping if they no longer receive ransom money. I can't even imagine what they are going through being held captive for so long, as well as the other 128 people.
In the year 2009 along, there were over 217 pirate attacks. That was up 111 attacks from 2008. To me, this just seems unimaginable in this day and age. How can this still be happening? We can put men on the moon, but we can't control what goes on in the high seas. Or can we? Do you think government can or should do more? Should they pay the ransoms? Should they just go in with all guns a blazing? Should more countries take a zero tolerance stand on pirates? Or, do you think it will always be like this?
Hollywood has really distorted people's opinions on pirates. I think everyone should watch The Caribbean Pirates by the History Channel to see what it was really like. They might think differently about modern day pirates too. As much as I love the old pirate movies, including Treasure Island and Pirates of the Caribbean, I still feel a little sad that the subject has been glamorized so much and made these criminals out to be heroes. What will it be like in another hundred years? Will they make movies about LA street gangs and glamorizing them? Well, make more movies, since there are already enough of those crappy films. It's just one of those things that makes you wonder sometimes, you know?
Posted by Rena Jones at 6:49 AM