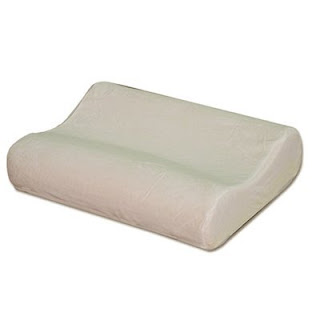 I'm having pillow problems again -- grrr! As you might recall, I complained about pillows a little over a year ago here. Yesterday morning I woke up and could barely move my head. My neck and shoulders were so sore. I had been using down alternative ones and those were working pretty good for awhile. However, they seem to lose their shape pretty quick. So rather than listen to me complain, Rick let me use his pillow, which I'm sure was one of my old rejects. You should see my room right now. Between our sleeping pillows and the extra ones I keep on the bed, there are ELEVEN pillows in this room! It's stupid. I lasted one night with the one Rick gave me. Yesterday it was bad enough to go up to town to look for a new one.
I've tried just about everything -- down, down alternative, fiberfill, memory foam, even some made from buckwheat. The only thing I haven't tried is the rubber/latex ones that Bish recommended in my first pillow blog. That might be my next option. Anyway, I came home with a contour pillow, much like this one in the picture. It is a memory foam one, which I was skeptical of because I don't like the other foam one I have. It's way too hard and heavy. This contour one is much smaller and lighter, so I decided to give it a try. I slept pretty good on it, but my neck is still sore. I'm thinking that might be because of the night before, and not so much because of the new pillow. The contour one feels like it's what I need, which the curved part going right under my neck. So, I'm going to give it a few more tries and see how it works.
I also did something really SCARY yesterday. I bought one of those hair color removing kits and decided to give it a try. This was a big deal for me because I have reddish-brown hair, but over the years I've been coloring it a very dark brown. After damaging it so much, the ends were starting to look black. So, putting a peroxide mixture on very dark hair was a little unnerving for me. I was trying not to freak out, even when I saw the instructions would say my hair would be red-orange because hair coloring strips the hair of its natural pigments. The directions said you would have to re-color right away, so I was nervous about that too. Since my hair had gotten so dark, I had to leave the mixture on a whole hour. The freaky thing was -- it worked! However, my hair was not only red-orange in places, almost copper, but blond in a few other places. So, then I re-colored it with a shade closer to my original. As you can see in the picture below, the ends are still kind of dark. Sorry for the scary looking picture, but the whole thing freaked me out bigtime! I'm debating to do the remover again to even it out more the next time I color. Even with the darker ends, most of the black is gone. Now it's red and dark brown -- ha! So, with a little more work, I might be able to get it back to how it used to be. Maybe ... wish me luck. 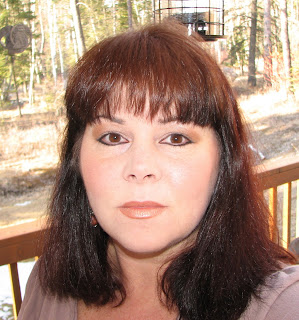