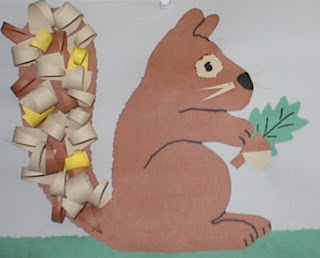 Lately I've been working on my kid's yearbook for school. That means I'm spending a lot of time in my photo files on my computer. I'm sure you all know how that goes. I go looking for one thing and end up spending 15 minutes looking at something totally different. Anyway, I came across these squirrel pictures today. My girls made these back in 2002. At the end of every school year, I collect all my kid's work and put it into 3" binders. Some projects, like these squirrels, are too bulky so I take pictures of them instead.
It's kind of funny though because back when the girls made these, I wasn't into squirrels much. In fact, I'd chase them away from the feeder when I lived in California because they scared all the birds away. It's a totally different story now and I'm usually chasing the turkeys or woodpeckers away so the squirrels can eat. My attitude for them has totally changed. I cried when one died from old age on my deck last year. I was heartbroken when I saw another one with its back legs paralyzed. I've been entertained watching the three babies grow up. The stupid little things have really grown on me. Some people hate squirrels, but I find them fascinating.
One of my favorite movies is Funny Farm with Chevy Chase. He plays a sports writer who moves from the big city out to the country so he can be a novelist. As he settles in, he's hit with writer's block and becomes distracted by everything but writing. In the meantime, his wife writes a children's book about a squirrel, who represents her husband moving from the city to the country. She ends up selling her story, which sends him down into his depression even more. If you haven't seen this movie, you should. It's hilarious at times. And of course, I like it because of the squirrel.
I've been playing with the idea of making a page on Facebook for people to post pictures of their kid's artwork. I looked and there wasn't anything like that, not for children's stuff anyway. What do you think? If there was a page like that, would you be willing to post pictures of your kid's artwork projects? 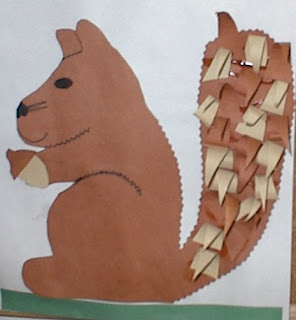