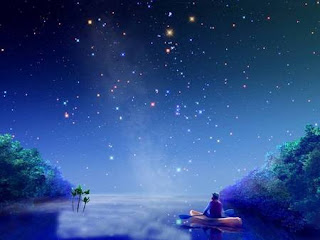 Now I know what Christmas in July really means. The sky last night was amazing. I couldn't sleep, so I kept getting out of bed to look outside. I probably got more exercise last night getting in and out of bed than I did all day. I wish I'd gotten some pictures, but there was a lot of action here last night. I didn't feel up to fussing with my camera, so I have to settle with this image I snatched online. The action was of the people kind, not wildlife like it normally is. I think there was a fight at our neighbor's house, but the person they took away wasn't anyone we knew. But anyway ...
The star-filled sky was perfectly clear. I sat on my bedroom floor so I could see up as far as possible. Normally, I would have gone on the deck to look, but not last night. Rick was trying to sleep and had been up too late as it was. And, not to mention the bear activity we've had. I probably would have been fine because prior our road was full of police cars, fire trucks, an ambulance, and a tow. However, the stars were shining through the branches of the pine trees. The movement of the trees made them twinkle and they looked like lights on a Christmas tree. It was absolutely beautiful.
We had beautiful, starry nights at my house in California, but it wasn't anything like this. Last July when I was visiting, my mother-in-law said, "Oh, look at the stars!" The sky looked like it always had for me while living in the area. Ojai isn't a big place and the night sky does have a ton of stars sometimes. But suddenly, I realized how different Montana was. We're higher in elevation and there are even less lights to get in the way. The night sky here is nothing short of spectacular and even more in the winter.
It's supposed to be in the 80s again today, so I'm sure the sky will be the same way tonight. Maybe I'll be brave and sit on the deck to enjoy it. Maybe I can get some pictures too, though night photography isn't something I know much about. I guess it wouldn't hurt to try. Hopefully, I won't be eaten alive by mosquitoes, or worse, something bigger. But I tell you, if I hear even one stick snap, I'm coming back inside!
Posted by Rena Jones at 7:57 AM