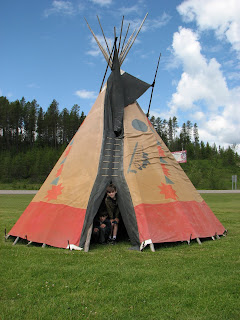 I don't know why I'm so tired, but I am. My in-law's arrived last weekend and just left yesterday morning. It's not like we ran around filling every hour of the day, but for some reason I'm really worn out. I didn't go online hardly at all, so now I'm behind with blogs and everything else that's been going on in the world. I need to get caught up. I also had severe back spasms two nights this week, so that was really unusual for me. I've been leaning back on a Shiatsu back massager and I don't know if that's helping or making it worse. I was so sore from it yesterday, but my back feels a little better now.
I hope everyone had a nice 4th of July. We went to the local parade in town and that was a lot of fun. We'd never gone to it since moving here, but I'm sure we'll go again. It wasn't quite as political as the parades were where I grew up. There were a few candidates riding by, but for the most part, it wasn't like what I was used to. The boys collected so much candy that it was almost like Halloween. We decided to skip the fireworks show because they don't start until 11pm and my in-laws were tired. Maybe next year.
Tuesday we went into Glacier and had a picnic lunch by Lake McDonald. My in-laws went into a few of the giftshops and then we headed towards East Glacier. We stopped at Goat Lick and saw a few mountain goats off in the distance. It's hard to get excited about them when they're that far away, since we've been so close to them before. My MIL did not want to go on the Going-To-The-Sun Road though, so we skipped that. It's really high up. Then we went to Two Medicine and let the boys fish for awhile. We had dinner there as well. That place is special to me because it was where I was first inspired to write a children's story. If it wasn't for that campground, I might not have tried to write for kids. The picture of the boys above was taken at a giftshop on our way into the park. We found a cute salt & pepper set with a moose there that matches a wine bottle holder we already have. Now if we could find a moose napkin holder, we'll be all set!
My ILs left the house at 7am yesterday and then I went up to Whitefish with Rick so he could go to the dentist. He's been in a lot of pain with a tooth and finally had a root canal. That took a few hours, so I sat and read. I had found a copy of Night of the Grizzlies finally in one of the giftshops inside Glacier. After his appointment, we ran some more errands before coming home. As soon as we got here, I dove back into that book and read it until I was done. GREAT book! I think books like that should be a must-read for anyone hiking and/or backpacking in grizzly country. Anyway, Rick had to go back to work today, but just for the one day before the weekend starts. I'm hoping to find some energy here sometime so I can get caught up with laundry and try to get things back to normal. It's amazing how much you can get out of a routine when you have visitors. I hope to catch up with blogs as well and see what everyone else has been up to. It's also supposed to be 90 degrees today, so I'm not looking forward to that. I would be if I were out in the kayak, but that won't be happening today.
Posted by Rena Jones at 8:10 AM