Yesterday we drove to the Montana/Idaho border to ride on the Route of the Hiawatha Bike Trail. It's an old section of railroad that's no longer used. If you click on the link, you can read all about it as well as watch a really cool video clip. The trail is 13 miles long, but technically it's over 14 because you have to ride through one of the tunnels twice. It's a 1.7% grade, so you can practically coast all the way. At the end there is a shuttle bus service to bring you and your bike back up. Over the trail you traverse through pine forests, travel over 7 high train trestles, and ride through 8 tunnels.
It was an incredible ride. We got there in the early afternoon, so we felt a little rushed at times because we didn't want to miss the last shuttle. If you miss the last bus, the only way to get back to the parking lot would be turning around and doing it all again -- uphill. However, we had a blast and will definitely do it again, hopefully with the girls next time. Here is a picture of the sign, right before the trail begins ... 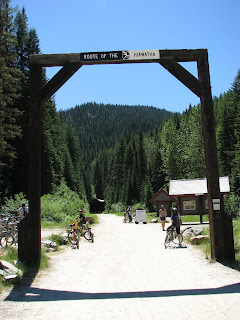 The very first part of the trail is a tunnel. And, this isn't just ANY tunnel! This one is 1.7 miles in length and there are NO lights inside. It's long, it's cold, and it's darker than dark! Because of this, you can't go on the trail without bike lights and helmets. I wasn't sure how the boys would do in the tunnel, but they did great. The scariest part for me was that there were ditches on both sides near the wall, about a foot wide and filled with water that soaked down from the mountain. It wouldn't be fun if you got too close to the edge and went into that. In addition to the ditches, you have to maneuver through complete darkness and deal with people passing from behind and people coming the other way. Since it was Saturday and a gorgeous day, the trail was packed. However, we never really had a lot of people near us at any time since everyone comes and goes at their own pace. Below is the entrance to the first tunnel. Neil is riding into it and Rick is helping Nathan with his lights. This is the 1.7 mile long tunnel. 1.7 miles doesn't sound that long, but it's different in complete darkness. The shuttle bus brings you back up the trail, but you ride through this tunnel TWICE! 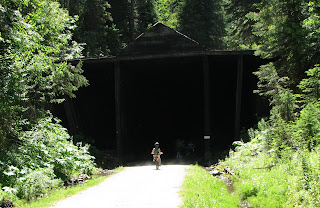 You ride through some amazing wilderness area and some of it was very high up with incredible views. There were wildflowers everywhere. I would have loved to stop and take more pictures, but if I did that, we never would have gotten anywhere and we might still be on the trail. Most of the pictures I took were while I was actually riding my bike. Not exactly safe, but oh well. Here's a picture of everyone riding through the forest ... 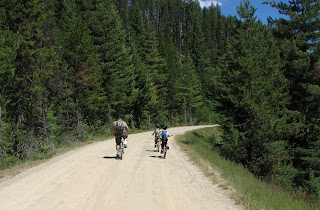 This next picture is of one of the train trestles we'd eventually be riding over. Yes, that's it WAY over in the distance. The sky looks white in the picture, but that's just glare. It couldn't have been any bluer and there was hardly a cloud in the sky all day. I think it was in the high 80s most of the time, so you can imagine how good the coolness of the tunnels feels. 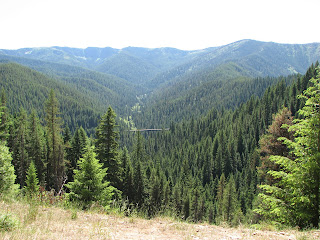 Below is a picture of Rick and the boys riding over one of the train trestles. I thought I had gotten a video of them going over one, but I must not have pushed the right button to turn it on. Oh well, maybe next time. I thought I'd really freak out on the trestles, but I was okay just as long as I didn't stop and look over the edge. If you stood on the boardwalks, you could see right through the cracks. Eeek! 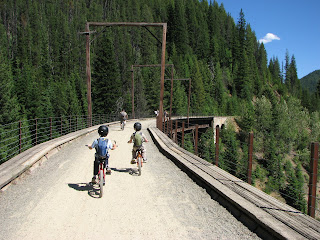 Rick took this next picture -- I wasn't brave enough. This was taken from that first trestle I showed you above. This was the longest and highest one. It's 220 feet in the air! Rick was a little braver than I was and took a few pictures looking down. 220 feet is a long way down, especially when you see the tops of pine trees that you know are over a hundred feet tall! 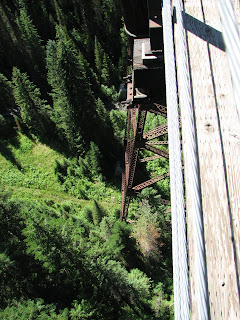 Anyway, it was a fun ride and definitely one we'll do again. You do have to pay to go on the trail and also for the shuttle, but it's not much and worth it. I'd like to get an earlier start next time and not feel so rushed. I believe they're in the process of expanding the trail by 31 miles on the Montana side, so that should be interesting to see what that's like when it's completed. The boys are already asking to go back!
Posted by Rena Jones at 8:46 AM