Night of the Grizzlies 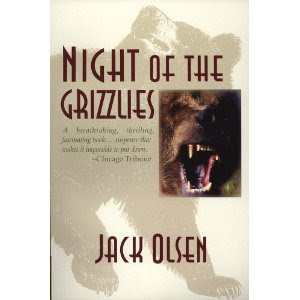 Have any of you read this book? Night of the Grizzlies was written by Jack Olsen. I'm not sure why the sellers on Amazon have the book priced so high. Maybe these are original editions. We see this book everywhere here. It's going to be one of the next ones I buy. Last night Rick and I watched the show on PBS about this story. It's about two different bear attacks that happened inside Glacier National Park in the mid-60s. I believe they were the first bear deaths in the park. This was back when they used to feed the bears and no one knew how dangerous that was. Oddly, the attacks happened almost at the same time, but on two different sides of a mountain. When they killed the bears, they found both of them to be injured. One had a torn foot pad and would have been in constant pain. The other one had glass embedded in its teeth from eating at the garbage piles. They say when a bear is in constant pain like that, they will act aggressively in order to survive.
Anyway, shows like this are a love/hate thing for me. I love watching the bears and I love learning about them, but I also know how much I hate those dreams I have about bears. I have dreams about bears A LOT! We mostly have black bears in our neighborhood. I've heard grizzlies will come around, but usually only if the food source is low. I have yet to see a grizzly near my house, but I know they're just over the hill quite often. I kept telling Rick I was going to dream about bears last night after watching that show. Right before bed, I was standing in the kitchen talking to Rick when he burst out, "Oh my God!" My heart stopped. I turned to look out the windows. Turns out, he was just freaking out about turning the coffee pot on instead of hitting the timer button and the coffee was starting to brew. Talk about a nice way to jump start my adrenaline right before bed -- ugh. Most couples have something sweet on their bedside tables, like flowers or candles. We have bear spray. Nothing says romance like a can of fiery pepper spray!
Well, I did have bear dreams last night, thanks to that movie. They weren't the usual dreams where the bear is wandering around the yard (usually minding its own business) and I'm trying to get the door or windows locked. Last night I dreamt that I was waiting for a bear to show up. That's it, but it felt like I dreamt it all night long. And then to make matters worse ... I'm sitting here on my bed this morning, sipping a cup of coffee. I see something moving down the hill and sure enough -- it's that female bear, Sassy. She stood up on her hind legs and knocked our yellow jacket trap off the tree. Then she sniffed it and started on her way closer to the house. I went on the deck to shoo her away, standing there in my nightgown in the pouring rain. She decided to wander around the neighbor's house and do her rounds. Since it's raining, most everyone's dogs must be inside because I heard no barking. That's really unusual when there is a bear outside. Now that I think about it, I see bears a lot when it's raining. Maybe they know the dogs are inside. It's odd because they've never bothered the yellow jacket traps before. I guess since she's finally tall enough, she wanted to check it out.
Anyway, I've read some good books about bears and bear attacks. Doesn't help my dream situation, but I think it helps to educate myself when we have bears so close. I hope I can find a copy of Night of the Grizzlies this weekend. My ILs are on their way up from CA to visit for a week, so I'm sure we'll be out doing some shopping. If there ever was a silver lining from people being killed by bears, it was because of this story. Soon after these maulings happened, the NPS put a stop to the feed sites. Over time, they learned more and how they can protect not only people, but the bears too. The book should make for some interesting dreams, anyway!
Posted by Rena Jones at 8:12 AM