Thar's gold in them thar hills! 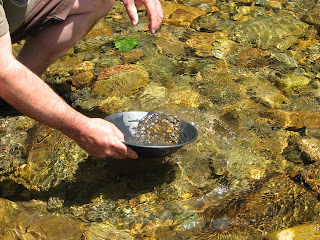 Have you ever panned for gold? The only time Rick did was at Knott's Berry Farm. It's an amusement park in California. For about twenty bucks, you could pan in a wooden trough looking for gold flakes. As a kid, my mom would never let me do it because it cost too much. Anyway, there's a place just a few hours away from here where you can pan for gold, but it's not a theme park. This is in an actual creek, way up a mountain. It's not even marked, at least not until you're right in the panning area. You're limited to where you can pan, but whatever you find, you can keep.
I was surprised to see how serious some people took it. There were several motorhomes parked up there with trailers filled with equipment. Everything we had read said you could only pan with non-motorized gear, but that didn't stop these guys. They were serious panners. I'm not sure how much they find, but it must be enough to justify them being there with their gear, RVs, generators, and so forth.
We found a quiet campsite near the creek away from everyone. We'd bought some pans on our way up, so we decided to give it a try. Unfortunately, we didn't find anything, but that's not to say there's nothing there. All those guys wouldn't be there if they weren't finding something. We had fun doing it, which is all that matters. I was surprised how interested the boys were in panning. I thought they'd get bored right away and just want to play in the water. They kept at it though -- Rick too. I think he's found a new hobby to do while I sit in the sun and read.
I'm sure we'll go back sometime. It's a fun way to spend the day getting some sun, playing in the water, enjoying a picnic and maybe even, finding gold. It is, however, right smack in the middle of grizzly habitat, so that's one thing you have to consider. It's in the Kootenai National Forest, so it's absolutely beautiful country!
Posted by Rena Jones at 10:15 AM