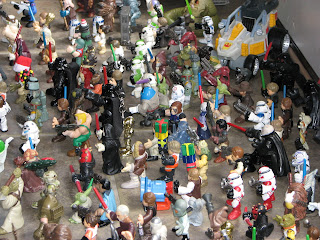 Have you heard the words "Collect them all!" in a television commercial or seen them on packaging? I'm pretty sure my boys think this is one of the Ten Commandments. If it says "Collect them all!" they think it's required by law. We always joke and call them the Children of Excess. It's not their fault, of course, because we keep buying more to add to their collections.
One thing Nathan and Neil collect are the Star Wars Galactic Heroes. Because they're chubby figurines, the boys call them fat guys. This picture is of their collection. As you can see, they're working hard to "Collect them all!" I have to admit, there are a few GI Joe and Indiana Jones ones here too, so they're not all Star Wars. It's a close-up so you can't see them all, but it's a good example of how big their collection is. Another thing they collect are those stuffed Audubon singing birds. The boys have almost all of those too. It's a conspiracy by the toy companies to take parents for as much money as possible. A good example of that is the Fisher-Price Geo Trax train set. You get the main set and then they come out with 500 little sets to add onto it. I love collecting things, so my kids get that from me. I collect wind chimes, magnets from national parks, Nightmare Before Christmas stuff, etc. When I was a kid, I collected sets of certain toys. I remember there were some really cute Wizard of Oz dolls and I wanted to "Collect them all!" I think there were a total of FIVE in the set. It wasn't anything like what we have today. My biggest worry was being able to eat all the cereal so I could buy another box to get whatever free toy came in the set. "Collect them all!" had a totally different meaning back then. Oh sure, I had a lot of toys and I was just as spoiled as my kids are today. My biggest collection was Barbies, but when it came to other toys, they just didn't make as many back then. When my girls were little, they collected Beanie Babies. That of course, brought out the mini ones from McDonald's and we had to try to "Collect them all!" Nichelle collects model Breyer Horses, but they're so expensive that it's harder to "Collect them all!"

"Collect them all!" -- is there something you had to have the whole set? 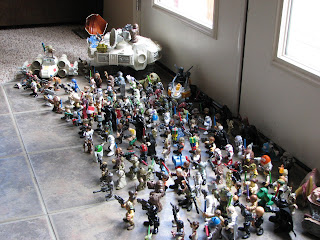