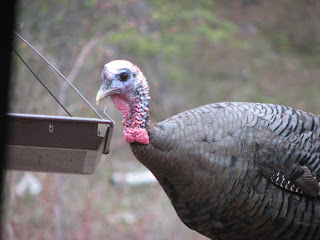 What do you wake up to first thing in the morning? Rick has one of those CD player alarm clocks, so he wakes up to music. Usually it's something bold, like a tune from Star Wars. Right now he has it set to the Red Hot Chili Peppers' song "Snow (Hey Oh)". I'm going to have to have him change it because I absolutely LOVE that song. Every time his alarm goes off, it starts up and then he hits the snooze button -- grrrr! He needs to change it to something I don't want to listen to, like Neil Diamond or one of his 80s songs. Then the snooze button won't bother me. However, I also get awoken to what's in the picture today -- turkeys. We have wild turkeys roaming around all over the place. Right now there's a huge flock working their way up the hill in my backyard. A bunch of them were on the deck, as shown in the picture below. The squirrel was trying to get her breakfast, but it was a little intimidating with 6 humongous turkeys stomping around, and more on the ground below. They pigged out, pooped all over my deck, and are now moving back up the hill. It's kind of funny to think about it. At my house in California, our neighbor had this rooster that used to wake me up everyday. The stupid thing would crow all day and all night. Now I get woken up by crazy wild turkeys.
So, I ask you -- what wakes you up in the morning? 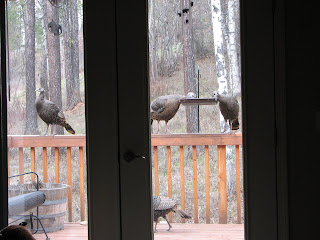