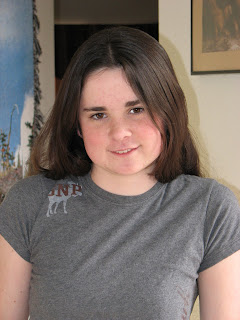 This is my daughter Nicole. She will be 18 on April 14th. Yesterday was a big day for her. She was scheduled to take the ACT test at the local college. She spent all last week studying for the test. She studied, she worried, she studied, she fretted. In addition, she was on "stand-by" for the test, so she wasn't even sure if she would be able to get in. She got to the college early yesterday morning in a bundle of nerves. Fortunately, she got in and was able to take the test. After 3-1/2 hours of testing, she came out feeling pretty good about it. She's a little unsure how well she did with the math, which has always been her weak point, but the rest she felt good about. On her way home, she stopped at the mailbox and received a letter from Pensacola Christian College in Florida that she's applied to. It was an ACCEPTANCE letter! She couldn't be more happy and we couldn't be more proud of her.
Nicole started her education at Monica Ros School in Ojai, California when she was 3 years old. It was a small, private school in the east end of town where I grew up. We loved the school, but the tuition went up every year and soon it was as much as our house payment. We had to look into another option for our girls. Both Rick and I went to public school in Ojai, but we really didn't want to go that route with our girls. At that time our church had just started a school, so we put the girls in there. It wasn't even October yet and we were at our wits end with how it was going. The school was struggling for students and they accepted anyone who applied. Many kids who were trouble makers ended up there. I guess maybe their parents thought a Christian school would straighten them out. Normally, that might be the case, but not with the lack of discipline this school had at the time. My girls didn't fit in -- they were shy, quiet, polite, well-behaved, etc.
In addition, Nicole's first grade teacher wanted to put her into a special reading group because she wasn't at the same reading level as the other kids. This wasn't her fault. It was because her previous school used an unusual phonics program where kids learned how to sound letters out by using little picture symbols. It worked great for Nichelle because she went from kindergarten to 2nd grade there, so she had more time with it. Nicole changed schools right at a crucial time, so switching to a new phonics program was confusing. Her teacher suggested she be put into a special reading group so she could catch up. I said no. I paid for a copy of the book and Nicole and I worked on her reading every night. Within a few weeks, she was reading better than anyone in her class. I don't take credit for that because it belongs all to Nicole. However, it opened my eyes to homeschooling. We stuck that one year out at the church school and then we began homeschooling the next. Nicole was in the 2nd grade and Nichelle was in 4th grade when we started. That was 11 years ago.
It's funny to think her first grade teacher wanted to put her in a special reading group because Nicole is an avid reader now. I can't get her out of the bookstore or library. She can spend hours in those places. She just finished reading Michael Creighton's Jurassic Park. Nicole isn't some teenager who comes home with trashy young adult novels. She comes home with books from authors like Mark Twain, Edgar Allen Poe, Jack London, and other classics. Special reading group -- I don't think so. It's pretty amazing to think back when she was a scared three-year-old going off on her first day of preschool all the way to now being nervous about starting college. It's a surreal feeling for all of us and we're so very proud of Nicole!
Posted by Rena Jones at 9:50 AM